Project Orion was a study conducted between the 1950s and 1960s by the United States Air Force, DARPA, and NASA for the purpose of identifying the efficacy of a starship directly propelled by a series of explosions of atomic bombs behind the craft—nuclear pulse propulsion.

Early versions of this vehicle were proposed to take off from the ground; later versions were presented for use only in space. Six non-nuclear tests were conducted using models. The project was eventually abandoned for multiple reasons.

The Orion nuclear pulse drive combines a very high exhaust velocity, from 19 to 31 km/s (12 to 19 mi/s) in typical interplanetary designs, with meganewtons of thrust.The smallest Orion vehicle extensively studied, which could have had a payload of around 100 tonnes in an 8 crew round trip to Mars.

The Orion concept offered high thrust and high specific impulse, or propellant efficiency, at the same time. The unprecedented extreme power requirements for doing so would be met by nuclear explosions, of such power relative to the vehicle’s mass as to be survived only by using external detonations without attempting to contain them in internal structures. 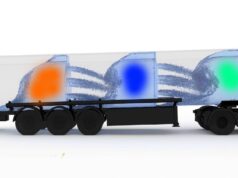