Check out this 1972 Chevrolet C10 Pickup Muscle Truck I caught up with at the 2019 Summit Racing Equipment Atlanta Motorama.I first found this truck in a hotel parking lot while attending the 2013 NSRA Street Rod Nationals several years back.It’s had a few upgrades since then.I don’t shoot videos on a lot of vehicles twice but I thought a update was in order on this 1972 Chevrolet C/10 Muscle Truck built by Big Oak Garage out of Alabama. 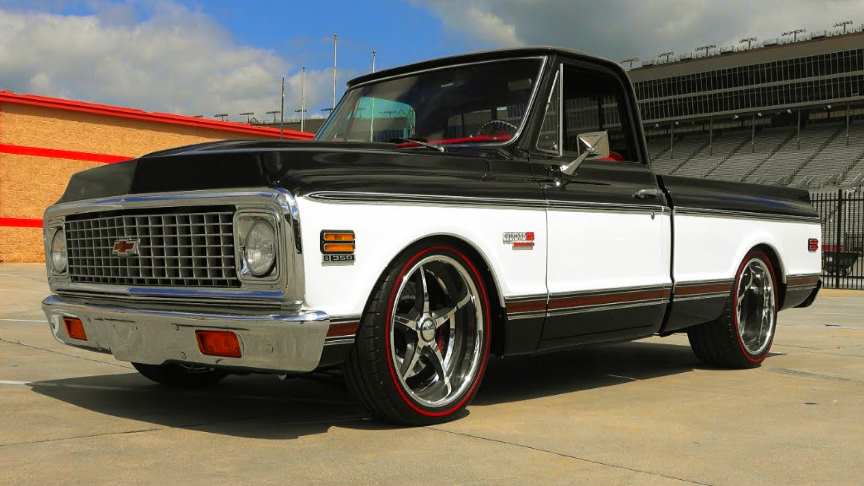 This truck was very nice the first time I shot a video of it.Now the stance and wheel choice has made a BIG difference.This was a cool truck before.But now it has been taken up another notch.Wheel choice is always personal.But I would not change the ones they have chose for this 1972 Chevrolet C/10 Muscle Truck from the 2019 Summit Racing Equipment Atlanta Motorama.

Will Posey of Big Oak Garage tells Me that although a bigger.Better set of wheels was the original goal.They went ahead and blew the bed apart and finished it to a higher level while making room for the wider rear tires. The interior is the same and still fits this 72 Chevy C/10 just fine.Under the hood a 383 stroker is the same as the first video feature.

No reason to change that!?!?.The black and white paint combination and red line tires really works well for Me.What can I say.I’m a fan of this 1972 Chevrolet C/10 Muscle Truck built by Big Oak Garage from the 2019 Summit Racing Equipment Atlanta Motorama and I am sure You will be to.Check it out!/ ScottieDTV