The development of the the Bulldog project (named for the Scottish Aviation Bulldog light aircraft that the then Managing Director of Aston Martin, Alan Curtis ,owned) started in early 1977 under the direction of Mike Loasby and stylist William Towns. 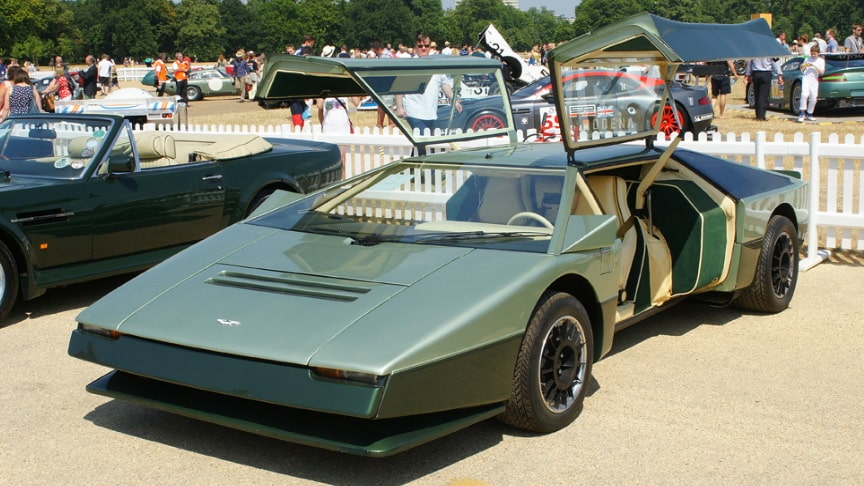 However Loasby’s departure to De Lorean soon after, and a change of focus to the then recently launched Lagonda saloon car, meant that Bulldog was put on standby. When it re-started in 1979, with new project manager Keith Martin working alongside Towns, the car was rapidly brought to completion and in March 1980 the car was unveiled.

It was powered by Aston’s existing 5.3-litre 90-degree V8, linked to two Garrett AiResearch T04B turbochargers giving a 50% power-boost. It was able to produce 600 bhp and 678 Nm of torque. While the Bulldog was no lightweight at 1540kg, its chassis was the stiffest ever made by Aston.

It was theorized a maximum speed of 380 km/h (237 mph) for the car but not later its unveil it was able to clock 307 km/h (191 mph) on track, making the Bulldog the fastest production road car of its day. Despite the fanfare of that achievement and some initial hopes that the Bulldog might go into a limited production of 25 examples, Aston Martin’s financial troubles and many subsequent management changes in the early 1980s resulted in the then-chairman of the company, Victor Gauntlett, selling the one-off.via/read more: 19Bozzy92