The new Aprilia RSV4 top speed is 305 km/h. Unmistakeable in its design lucidity and applied technology, the Aprilia RSV4 2021 is conceived around a 65° V4 engine never before seen on a factory sport bike, and a frame which is the heir to a dynasty that has won 18 titles and 143 Grand Prix races in the 250 GP class, enhanced by the latest applied electronics systems to manage the engine and the bike’s dynamic performance. 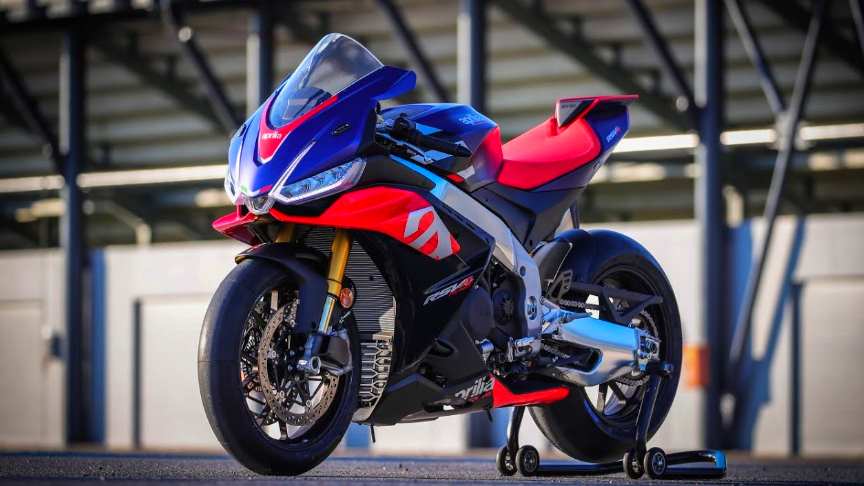 A genuine vocation of Aprilia which was, in fact, the first to adopt a Ride-by-wire multimap accelerator standard from the factory, but above all, the first to patent the APRC dynamic controls platform, the most effective and complete suite of electronic adjustments at the service of the rider to maximise performance.

Compared to the unit that equipped the RSV4 1100 Factory, the engine of the new Aprilia RSV4 benefits from a new bore to stroke ratio, with the latter going from the previous 52.3 mm to the current 53.3 mm (the bore of 81 mm remains unchanged). The crankshaft is new, with an increased crank radius, and the upper crankcase has been adjusted for the new stroke.

Engine displacement therefore goes from the previous 1078 cc to the current 1099 cc, thereby benefiting available torque that goes from the previous 122 Nm at 11.000 rpm to the current value of 125 Nm at 10,500 rpm. In addition to the significant peak torque value, it is important to note how it increases throughout the entire power output range, an extremely important result to make the RSV4 not only more effective in acceleration already from low speeds on the circuit, but also electrifying to ride on the road./REC Anything