When Nancy and her husband found a lot at the edge of Catalonia’s Garraf forest, they wanted a home that would fit the environment so they wrapped their home in cork insulation and installed a “natural” swimming pool that uses wetlands instead of chlorine. Instead of installing an HVAC system, architect Elisabetta Quarta Colosso strategically placed three thermal storage walls, or “Trombe walls”, to warm and cool the home. 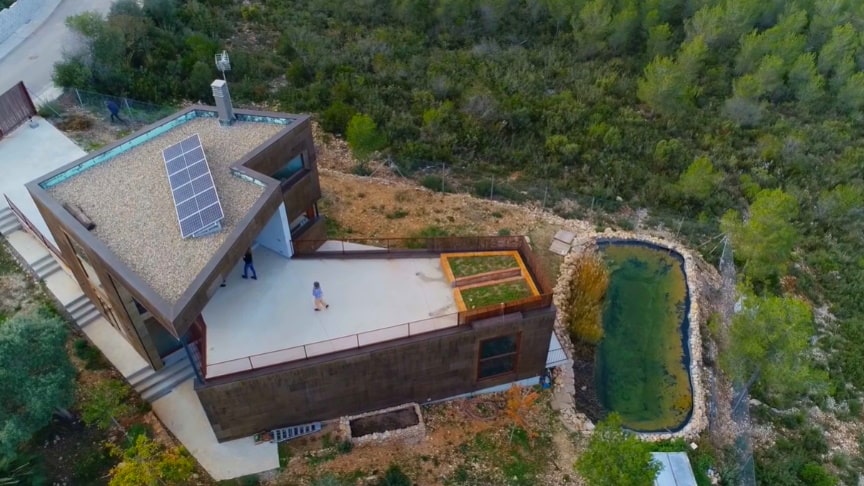 “A Trombe wall is a massive Equator-facing wall that is painted a dark color in order to absorb thermal energy from incident sunlight and covered with a glass on the outside with an insulating air-gap between the wall and the glaze.” In winter, the sunlight absorbed by the mass is converted to heat and then transferred into the living space. In summer, the system cools like a solar chimney by drawing in cool air from the north and pushing out warmer air in the southern vents.

Taking into account the three Trombe walls, as well as the local climate and the home’s passive solar orientation, Elisabetta estimates the home should need to use the tiny wood-burning stove only two weeks per year. Nancy confirms that it is only on the coldest winter nights or if there are several days without sun when they need to light it.

After nearly two years since construction, the cork cladding has begun to gain its own patina, but cork, unlike other insulating materials (like foam) that can lose its effectiveness after a few years, doesn’t lose R-value with time. It also proves an effective sound insulator and Elisabetta crafted a patio with cork walls on two sides for quiet contemplation.Kirsten Dirksen