Figee crane 2868 sat abandoned in Amsterdam’s Eastern Docklands for nearly four decades until a team devoted to boutique apartments rehabbed it into a three-story luxury apartment perched 50 meters (164 feet) above the IJ-River.When containers took over the shipping industry in the 1970s, the cranes on KNSM Island (“Royal Dutch Steamboat Company” island) became obsolete and were demolished save one. 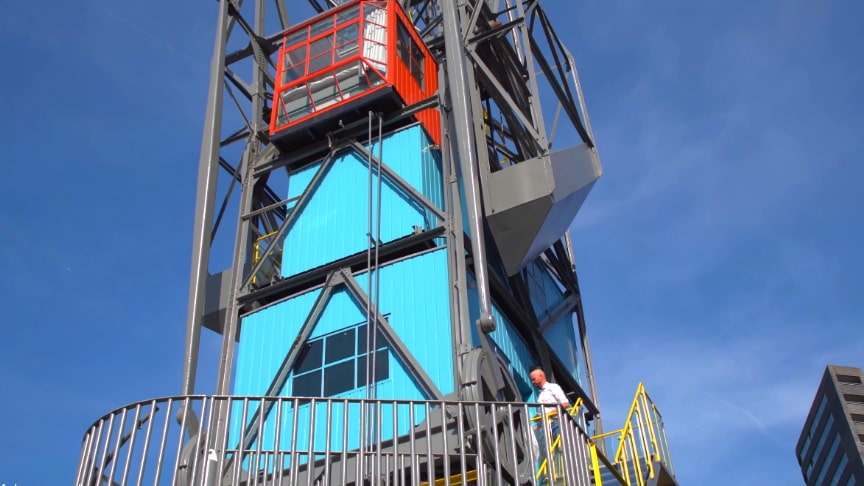 Over three decades later, a local resident rallied to save that remaining crane, eventually finding the developer/rental group Yays who partnered with the city of Amsterdam to create a second life for the industrial monument.

The crane, and the original operators’ huts, was broken down and shipped north where the interior was prefabbed – complete with a large bathtub that had to be dropped in while the roof was open- and sent back to the island as a fully-complete 40-square-meter elevated holiday home.

Instead of relying on the original vertical ladder for accessing the flat, the team created a spiral staircase to enter the first blue box which houses a living room and kitchen. A tiny staircase leads to the second blue box where one finds a bathroom (with tub/shower) and a bedroom. An exterior ladder leads to the top floor and the original crane operator’s hut which now has a bed and toilet and the original panoramic window once used by the machinist to monitor his work.//Kirsten Dirksen