To this day, the Dornier Do-31 remains the largest VTOL jet to take to the skies and the world’s only VTOL jet lift transport. Throughout the 1960’s, several countries launched ambitious programs to develop VTOL jets.Although Britain led the way with the development of the Harrier Jump Jet, Germany set out to build something even more ambitious, the world’s first vertical jet lift transport. 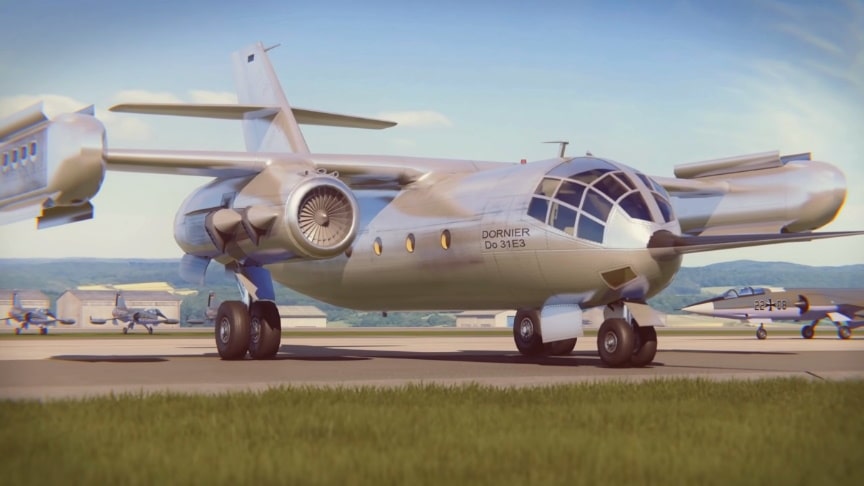 The Do 31 would combine the speed and range of a jet with the versatility of a helicopter. A plane that could deliver supplies and personnel to remote forward operating bases and support forces out in the field. The Do 31 utilized two vectored-thrust turbofans and eight lift jets in wing-tip pods. Watch the video from Mustard:

Together the 10 jets could generate an incredible 66,000 pounds of thrust to facilitate vertical or short take-off and landing operations. In forward flight, the lift jets would be shut off and the Do 31 would fly like a conventional plane. The aircraft could reach speeds of over 700km an hour and carry 36 fully equipped troops or nearly six tons of cargo.

As development of the Do-31 progressed, some even saw the potential for vertical jet lift technology to revolutionize civil aviation.  Developing the world’s first VTOL jet transport would be fraught with enormous technical challenges, and as the Cold War evolved, VTOL capable jets became less of a strategic priority.The project was ultimately cancelled in 1970. via/read more:Mustard