When the factory was renamed EMW in 1952, further modifications followed for the R-35, which was then called EMW R-35-3. The frame was lengthened, reinforced from 2 to 3mm and dampened straight-through rear suspension, which also required a new gimbal housing. Furthermore, the engine is ventilated in the air filter, while in the original R 35 the ventilation leads into the engine block via a small tube between the push rods. 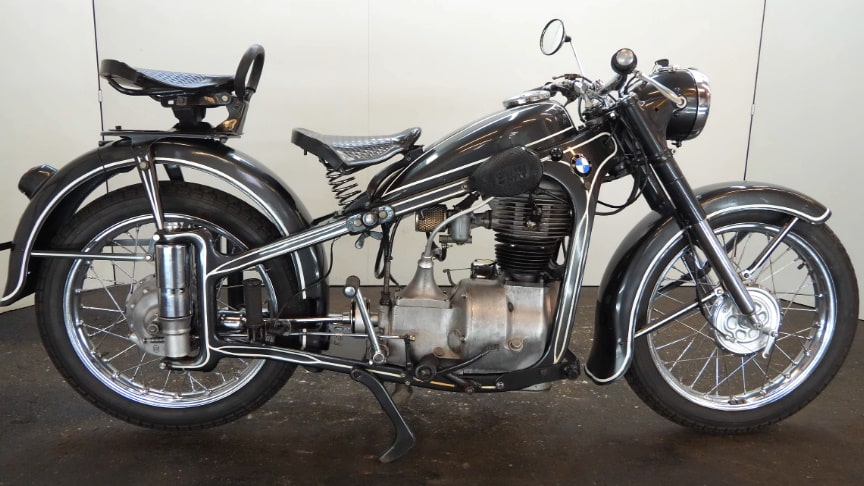 The saddles are different. The Awtowelo BMW R 35 had two springs on the outsides of the leather saddle, while the EMW R-35-3 has one central spring on the rubber saddle; other differences are also on the fenders. EMW as a trademark ended with the cessation of production of the passenger car types 327 and 340/2 as well as the motorcycle R 35/3 in 1955.

In that year 13,700 EMW R 35/3 were produced. After that, no more four-stroke engines left the assembly line in Eisenach, the two-stroke engine was considered economical, light and powerful. Motorcycle production was completely abandoned in Eisenach. About 50,000 to 66,000 units of the R 35/3 are said to have been manufactured.

A total of around 90,000 of the post-war BMW/EMW R 35 were manufactured, of which around 27,000 were exported.This R35/3 has been restored in 2013 and is in a roadworthy condition. A folder with all invoices and a spare parts list comes with this bike.//classic-motorcycle.com