Powered by solar, hydrogen, wind and water energy, the white catamaran will take six years to tour the world.This is the Energy Observer, the first autonomous hydrogen boat to sail the seas. During its stopovers, Energy Observer produced a total of 488 kg, almost ½ ton of hydrogen, during 1496 hours of functioning, that’s an efficiency of 42%. 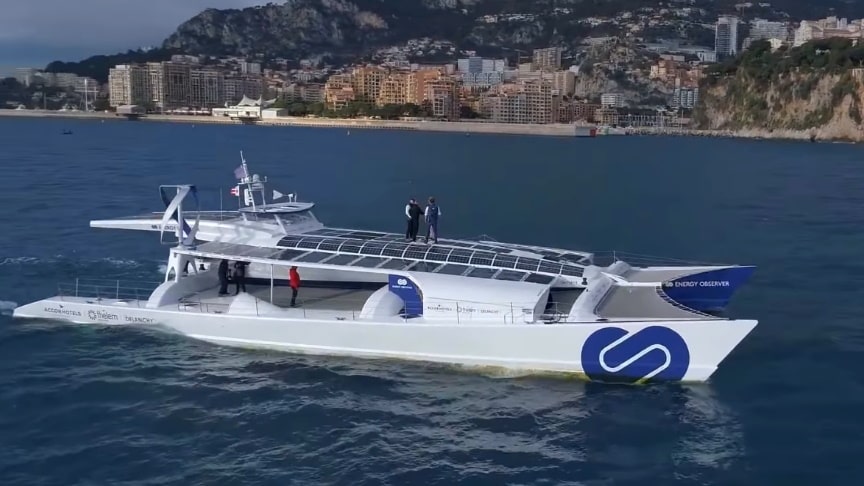 Hydrogen supplied up to 60% of the energy needed for a typical voyage, and the remaining 40% was attributed to solar power, using a fuel cell functioning on average for 6 of each 24 hours of navigation, with an efficiency of 48%On the sides of the boat are The Oceanwings wings which are going to reduce the vessel’s energy consumption, accelerate its speed, and above all, enable it to produce energy and hydrogen while navigating.

Increase energy production during navigation by producing hydrokinetic energy (reversing the electronic motors into hydrogeneraters).Produce hydrogen during navigation by the electrolysis of water.Up until now, hydrogen production was only possible during stopovers, but the installation of Oceanwings® will make hydrogen production possible while the vessel is navigating. It will only be for 1 to 2 hours a day in the beginning, but introducing hydro-generation by inverting the electric motors is an indispensable power supplement in Northern Europe where the sunlight conditions are not as favorable.Wonder World