During the Second World War, Prime Minister Winston Churchill and his cabinet went underground to continue meeting and planning the war effort. A maze of tiny bunker rooms still sits beneath what is now the Treasury building. 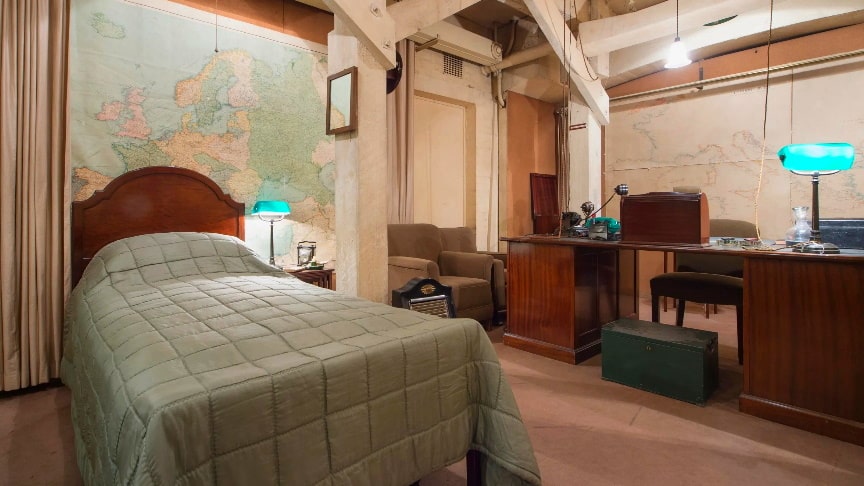 Inside what everyone believed was Churchill’s private toilet was a custom-encrypted telephone (provided by Bell labs called SIGSALY or Green Hornet) that connected the prime minister directly to the US president, wrapping their voices in white noise (only the receiver knew the frequency in order to decode it and get a clear voice).

The Cabinet War Rooms became fully operational on 27 August 1939, a week before Britain declared war on Germany, but Churchill wasn’t interested in going underground until Germany’s Blitz bombing offensive began in September 1940. Once 10 Downing Street was bombed, he convinced even his cook (whose kitchen was hit) to go below ground. “Churchill’s War Cabinet met here 115 times, most often during the Blitz and the later German V-weapon offensive,” explains the Imperial War Rooms website.

“The Cabinet War Rooms were in use 24 hours a day until 16 August 1945, when the lights were turned off in the Map Room for the first time in six years.”The rooms have been preserved or reconstructed with such fidelity that it’s rumored Tom Cruise will be moving in to prepare for the next filming of Mission: Impossible.