Hauen a Albis RC Model Air Show SwitzerlandRainer mattle with a own construction CCCP Kalinin K-7 RC Scale Model Airplane unusal. The Kalinin K-7 was a heavy experimental aircraft designed and tested in the Soviet Union in the early 1930s. 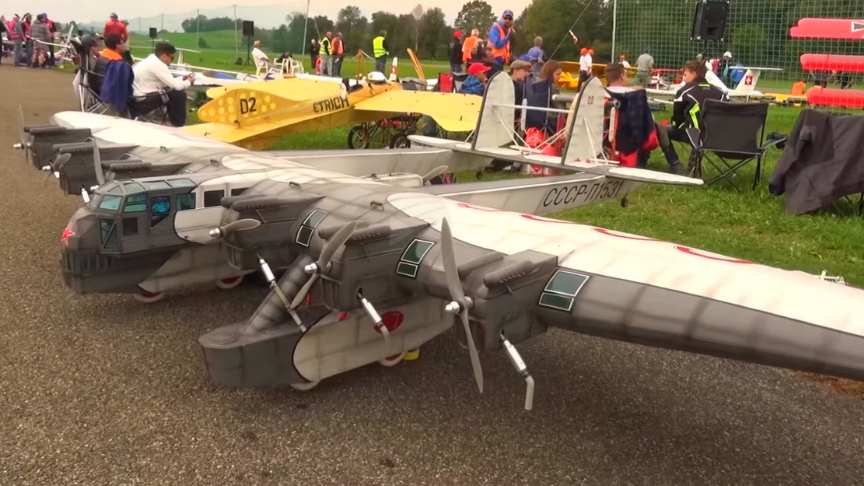 It was of unusual configuration, with twin booms and large underwing pods housing fixed landing gear and machine gun turrets, enjoy the flight. Soviets hoped that the plane would pull double duty as a troop transport and a civilian airliner.

With a wingspan close to that of a B-52, only one full-size K-7 was ever built, and it crashed after seven flights due to a tail boom structural failure, so it’s doubtful you’ll run into another RC version at the next giant-scale fly-in.With six 15cc ASP gas engines and an electric pusher motor, the 99-pound model has plenty of power. Built up from wood, it’s also equipped with 16 servos, brakes, and steerable nose wheels and can be disassembled into six modules for easier transport.

The real Kalinin K-7 wingspan alone was over 170 feet long, holding this record until the B-52 Stratofortress came along in 1952. To get this 54,000 lb. off the ground, 7 engines were used however, that wasn’t enough. During its 8th test flight, massive vibrations jeopardized the structure of the plane, causing it to crash..RCHeliJet