This sturdy Model J in has been restored a while ago and is in great shape.Following an abortive debut in 1909, the twin-cylinder Harley-Davidson returned for 1911 in redesigned form boasting mechanically operated inlet valves, replacing the ‘atmospheric’ type inherited from the single. Production really took off and this ‘F-head’ (inlet-over-exhaust) ‘pocket valve’ engine – built in 61ci and 74ci capacities (1,000cc and 1,200cc respectively) – would remain in production for the next 20 years. 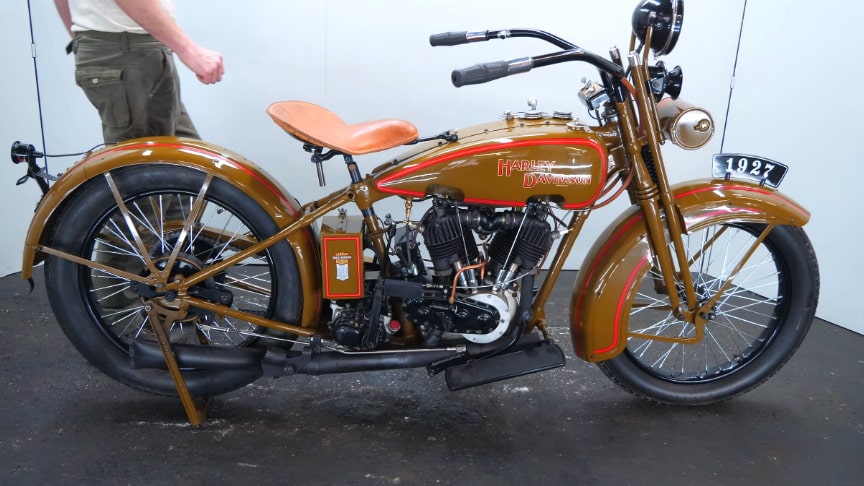 The Harley single’s transmission arrangements – direct drive by means of a leather belt – were continued at first on the twin but the need to make better use of the engine’s power characteristics, particularly for sidecar pulling, prompted the introduction of a two-speed rear hub for 1914, by which time chain drive and a proper clutch had been adopted.

Later that same year a conventional, three-speed, sliding-gear transmission with ‘step starter’ was introduced on the top-of-the-range version of the twin which, with full electrical equipment, was listed from now on as the Model J. Periodically revised and up-dated.

The Harley-Davidson F-head twin had gained a front brake, stronger fork and pumped lubrication – and an enviable reputation – by the time production ceased in 1929. Classic America Iron says this about the Model J, ‘The J models dominated Harley’s offerings in 1928./classic-motorcycle.com