In AD 79, a baker put his loaf of bread into the oven. Nearly 2,000 years later it was found during excavations in Herculaneum. The British Museum asked Giorgio Locatelli to recreate the recipe as part of his culinary investigations for the cinema production ‘Pompeii Live from the British Museum’.The British Museum 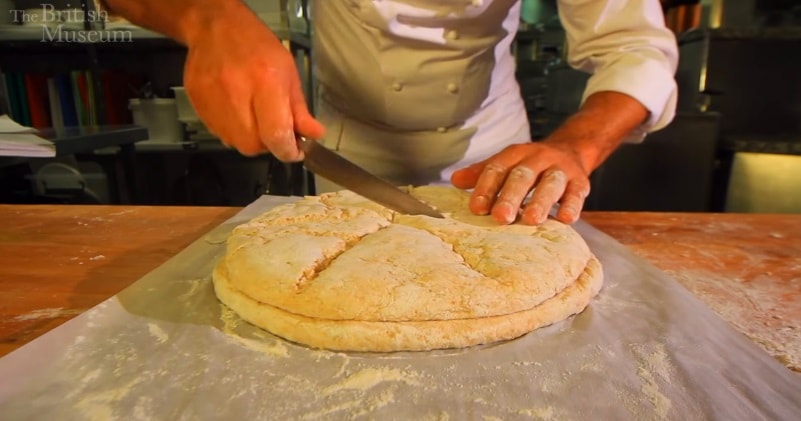 In response to the many interesting, thoughtful and sometimes amusing comments we’ve received for this video, we’ve asked Paul Roberts, the curator of our Pompeii exhibition ‘Life and Death in Herculaneum’, to give us the academic background.Watch the video from The British Museum for more info:

It was one of the Romans’ great boasts at table that they could serve white flour bread at fine banquets (at normal tables they might well have eaten poorer grades of wheat or other grains, such as spelt or barley, and even beans, lentils or chestnuts.) You will see that Giorgio scores the loaf: I’ve examined lots of the loaves and I am convinced that they are scored.

It’s important to remember that the loaves survived because they were carbonised. They have, in effect, shrunk somewhat from their original form, because of the loss of liquid on exposure to the sudden blast of heat form Vesuvius – conservatively estimated at 400 degrees centigrade. All other foodstuffs – figs, beans, grain etc are noticeably smaller than they ought to be – and there is no reason the same shouldn’t be true of bread./read more: The British Museum