Hexa from Lift aircraft is an electric-powered, vertical-takeoff-and-landing aircraft, or eVTOL aircraft,with an airframe built entirely of carbon fiber.Eighteen independent electric motors and propellers are the only moving parts needed for perfectly stable, controlled flight. 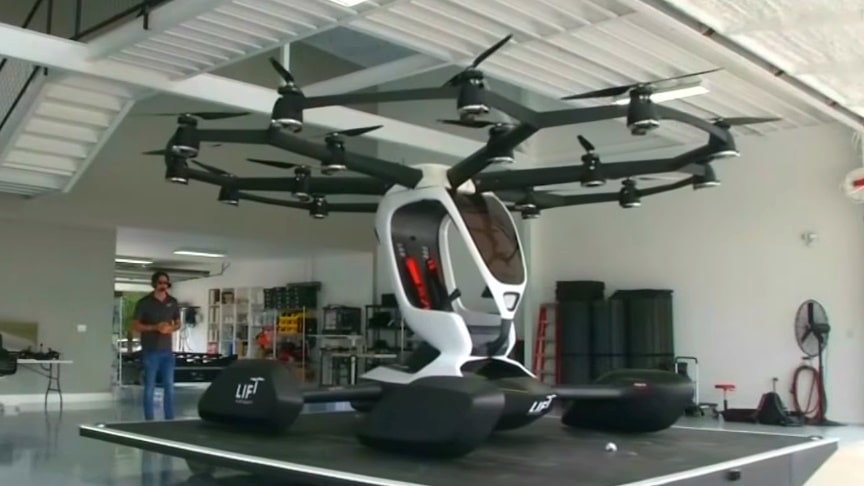 Capable of landing on both land and water, HEXA has four perimeter floats for buoyancy and stability and a fifth, center float filled with energy absorbing foam for added buoyancy and crash protection.

A triply redundant autopilot computer with a single, 3-axis joystick is all that is needed to fly. Or tap on the seven inch touchscreen in “Look mom, no hands!” mode.The craft is also amphibious – it’s equipped with four perimeter floats that allow for safe water landings.

With an airframe built entirely of carbon fiber, Hexa weights in only 432lbs. and is compliant with the FAA’s Powered Ultralight classification so no pilot’s license is required to fly. Don’t worry, we’ll give you plenty of training!

The vehicle can fly with up to six motors disabled but is also equipped with an autonomous ballistic parachute.It can carry a 250 lb (113 kg) passenger for up to 15 minutes while retaining 25% battery life.The aircraft can fly at speeds of up to 55 knots (63 miles per hour), the maximum allowed for ultralight aircraft under FAA rules./LIFT Aircraft