Royal Enfield’s origins can be traced back to a small light engineering firm – George Townsend & Company – founded in Redditch, Worcestershire, in mid-Victorian times. The firm moved into bicycle manufacture and by the turn of the Century had been reorganised as the Enfield Cycle Company, makers of the ‘Royal Enfield’. 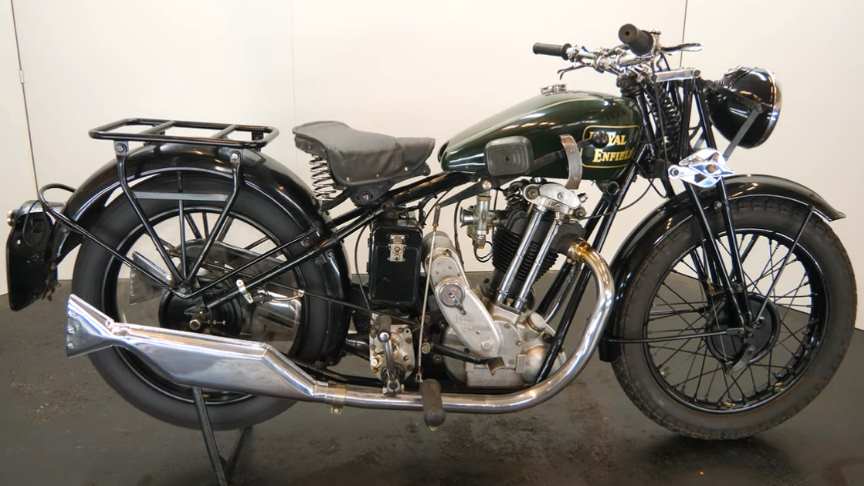 By 1904 the firm was concentrating on car production, resuming motorcycle manufacture in 1910 with a v-twin Motosacoche-powered lightweight which was followed by the famous JAP v-twin-engined 7hp sidecar outfit for 1912.

Enfield’s first 350cc single appeared in 1924 in overhead-valve and sidevalve versions, both of which used engines supplied by J A Prestwich. The JAP engine gave way to one of Royal Enfield’s own manufacture for 1925, and in 1927 the firm introduced its first 500cc (3½hp) model, which used the 1,000cc v-twin’s 85.5x85mm bore/stroke dimensions for an actual capacity of 488cc.

An overhead-valve version joined the sidevalve original for 1929 and both used Enfield’s own four-speed gearbox. In 1931 Royal Enfield the model J was the top model in the 500cc class.It’s full equipped with Amal carburetor, Bosch MagDyno and complete lighting set. This sporty overhead-valve Royal Enfield is in great shape.via/read more: classic-motorcycle.com