The Pegasus VBJ is a proposed VTOL business jet concept being developed by South African start-up Pegasus Universal Aerospace. It would feature a cranked dihedral wing and an X-tail design, and use two General Electric CT7 engines to drive in-wing lift fans and rear thrust fans through integrated gearboxes, all managed by multiple redundant computer systems.wikipedia 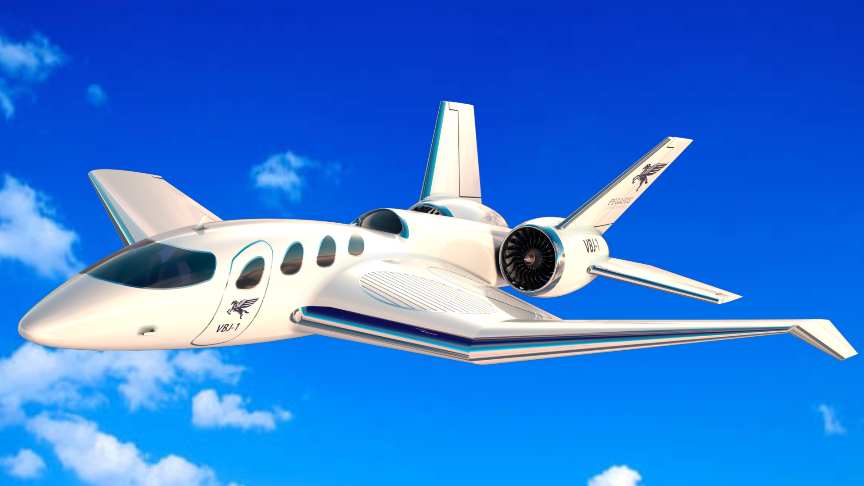 With the VBJ® one would be able to take off and land anywhere, whether it’s on a rooftop, a yacht, or a helipad – the possibilities are endless. In fact, Pegasus VBJ® is heralding a new era of point-to-point air travel.

Its state of the art performance is unmatched by helicopters, piston engine planes and any of the tilt-rotor VTOL aircraft currently on market, with a range of 4000km from runway take-off (or 2700km in VTOL) with a 45 min reserve ; and at a cruise speed of 609 Kilometres per hour at 35 000 feet.

Compared to the cabin of a helicopter, Pegasus VBJ® comfortable with low noise and little to no cabin vibrations. This means more productive meeting or business time in travel. Pegasus VBJ® cabin is larger and more luxurious. With a smoother, faster flight and greater range Pegasus VBJ® will be beneficial in the “Golden Hour” of medical evacuations.via/read more: pegasusua