To conclude the celebrations for the 60th anniversary of Renault 4, the car maker has decided to team up with motion design hub TheArsenale to create a futuristic showcar, reinterpretation of this iconic model. 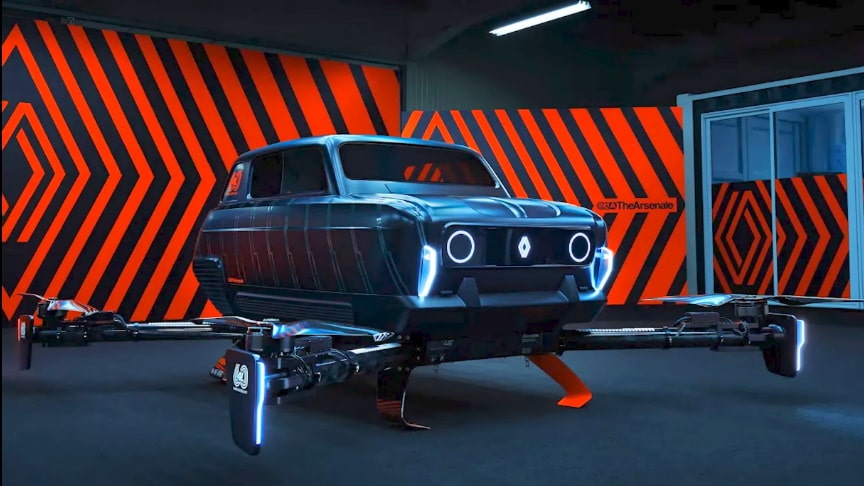 From a technical standpoint, AIR4 is powered by 22,000 mAh lithium polymère batteries that generate a total power of 90,000mAh. The vehicle counts on an orizontal top speed of 26m/s, with a 45° inclination during flights, and up to a maximum inclination of 70°.It can fly as high as 700m with a take off speed of 14m/s, restained at 4 m/s for safety reasons, and landing velocity of 3 m/s. Last but not least, AIR4 offers a maximum vectorial thrust of 380 kilograms, that is to say 95kg per propeller.

The vehicle, entirely made of carbon-fiber, maintains the same lines and contained mass of the original 4L, yet presenting new dynamic capabilities. The rigidity has been completely revised to include new concepts such as thrust or lift, which required hours of calculations and tests.

After its digital presentation today, 26th of November, AIR4 will go on public display from next Monday until the end of the year in the vibrant center of Paris at the Atelier Renault on the Champs Elysées, alongside other historic versions of the Renault 4.Beginning 2022, AIR4 will hit the American ground in Miami and then New York, before a pit stop in Macau./RorocaR