A wonderfully playful sheep named Bruce eagerly showed off his excellent coordination by skillfully and repeatedly deflecting the incoming rugby ball thrown by his equally playful human Tuscany Macdonald with his head. When the ball went out of bounds, Bruce followed McDonald closely to ensure the game wasn’t over.

A video of a head-bunting sheep uploaded to YouTube three years ago by Rotorua’s Tuscany MacDonald is going viral.In the clip Tuscany’s mum Maree MacDonald lobs a rugby ball to Bruce the sheep who returns the ball to Mrs MacDonald using his head.

Tuscany said the family discovered Bruce’s ball skills when they were throwing a ball about for their dog.”I can’t believe the attention it’s getting. It’s made the New Zealand Herald and Daily Mail websites and I’ve had a message from BBC News in Singapore,” she laughed.

And even though filmed three years ago, Bruce is still very much alive and destined to be for some time.He was a pet day lamb so is more of a family pet than anything. He definitely won’t be ending up on the dinner table.” 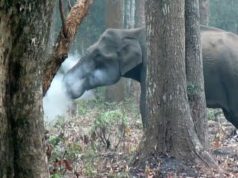