For 20 years, Bruce Campbell has lived on a Boeing 727 in the woods outside Portland and he thinks more people should consider retired jetliners as homes. As masterful works of aerospace science and engineering, he sees them as “unmatched by any other structures people can live within. They’re incredibly strong, durable, and long lived. And they easily withstand any earthquake or storm.” Given that they’re sealed pressure canisters, they are also easy to keep sterile. 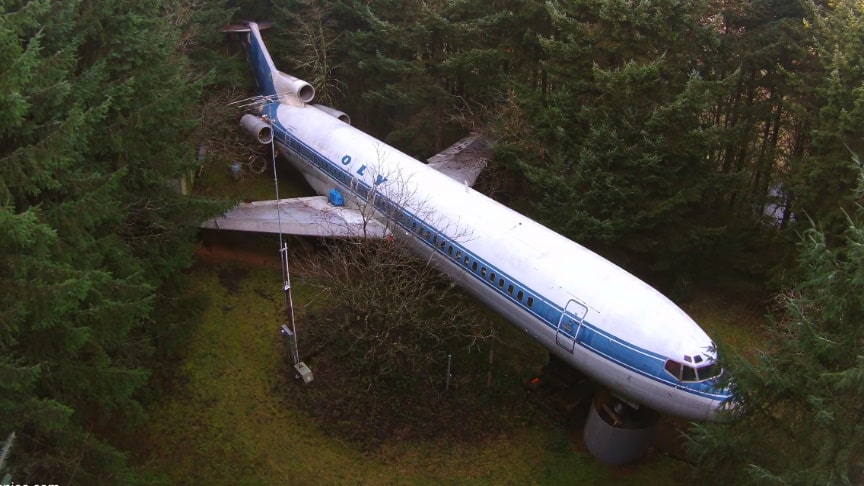 Campbell bought the decommissioned Boeing 727-200 in 1999 for $100,000, but he says he overpaid and cites Joanne Ussery as an example. She paid $2,000 for the plane’s hull and $6000 in moving costs. He used the plane’s native plumbing system, as well as water and electric hookups to create a residence complete with refrigerator, microwave, hot water shower and the native aft bathroom (toilet/sink).

Campbell’s Boeing 727 once flew Jackie Onassis and Kennedys (along with Aristotle Onassis’ body home for burial) and he still has the seat Jackie allegedly used. Campbell says three jetliners are decommissioned and sent to the boneyard on a daily basis.

He’s part of the Aircraft Fleet Recycling Association (AFRA), whose members are as dedicated as he is about showing the world planes make good homes. Campbell believes that instead of flying planes to death yards, they could be flown to empty land where an entire community of jetliners would make an ideal mobile home community.//Kirsten Dirksen