The Object 279 was a Soviet experimental heavy tank developed at the end of 1959.This special purpose tank was intended to fight on cross country terrain, inaccessible to conventional tanks, acting as a heavy breakthrough tank, and if necessary withstanding even the shockwave of a nuclear explosion. It was planned as a tank of the Supreme Command Reserve. 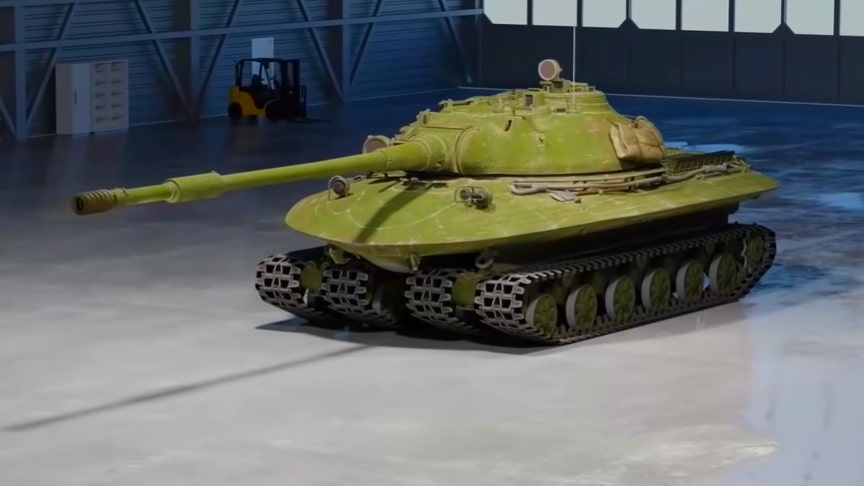 This unique tank boasted increased cross-country capability. It featured four-track running gear mounted on two longitudinal, rectangular hollow beams, which were also used as fuel tanks. The tank suspension was hydro-pneumatic with complex hydrotransformer and three-speed planetary gearbox. The track adjuster was worm-type. The specific ground pressure of this heavy vehicle did not exceed 0.6 kg/cm2 (~8.5psi).

The track chain, running practically along the whole track length provided for increased cross-country capabilities on swampy terrain, soft soils and area full of cut trees, The tank was equipped with the powerful 1000 hp 2DG-8M diesel engine, enabling the 60 metric ton tank to attain 55 km/h (34mph) speed, with active range of 300 km on one refuel.

It also had auto fire-fighting systems, smoke laying equipment and a combat compartment heating and cooling system.The tank hull, with a maximum armour thickness of 269 mm (10.6 in), was covered by a thin, elliptical shield protecting it against APDS and shaped charge ammunition, and preventing it from being overturned by the shockwave in case of a nuclear explosion.The tank was armed with the 130 mm M-65 rifled gun. The secondary armament was a 14.5 x 114 mm KPVT coaxial machine gun with 800 rounds.via/read more: wikipedia