Increased fuel efficiency, cost effective with inherently low emissions. A Fundamentally Better Engine.With two pistons per cylinder, working in opposite reciprocating action, these engines do not need cylinder heads which are a major contributor to heat losses in conventional engines. 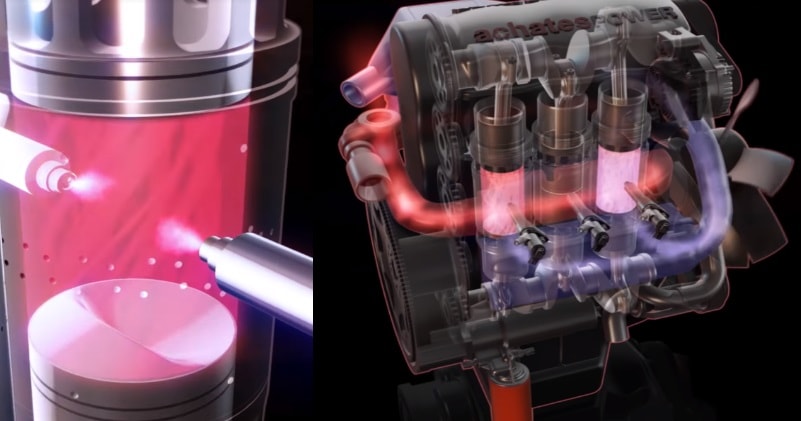 Ports in the cylinder walls replace the complex poppet valves and friction-creating valve trains of conventional engines. The intake ports at one end of the cylinder and exhaust ports at the other are opened by the piston motion and enable efficient uniflow air scavenging./achatespower

A two-stroke engine produces twice as many power strokes per revolution as its four-stroke equivalent. This advantage leads to smaller displacement engines for similar performance, and lower in-cylinder pressure to lower emissions compared to four-stroke conventional engines.

Research has shown two-stroke opposed piston engines to be wildly efficient. 3 cylinder designs are the most efficient, and it’s possible to achieve brake thermal efficiencies as high as 55%, a massive improvement for road car engines. The engine in this video is a 2.7L 3-cylinder producing 270 HP and 480 lb-ft of torque./achatespower

The Achates Power 2.7L Opposed-Piston Engine was shown at the 2018 North American International Auto Show.The truck will achieve a combined 37 MPG, exceeding the proposed CAFE 2025 regulation. The 3 cylinder engine is rated at 270 hp and 480 ft.-lb. of torque. The OP GCI engine is a project of the US Department of Energy’s ARPA-e program.