Thermoelectric tube from Panasonic harnesses thermal energy in hot water pipes for clean, renewable energy. Featuring a simple structure, in the future it could be used in factories to generate electricity from waste heat.Thermoelectric technology is the direct energy conversion from heat into electricity and has attracted much attention as a renewable energy solution. 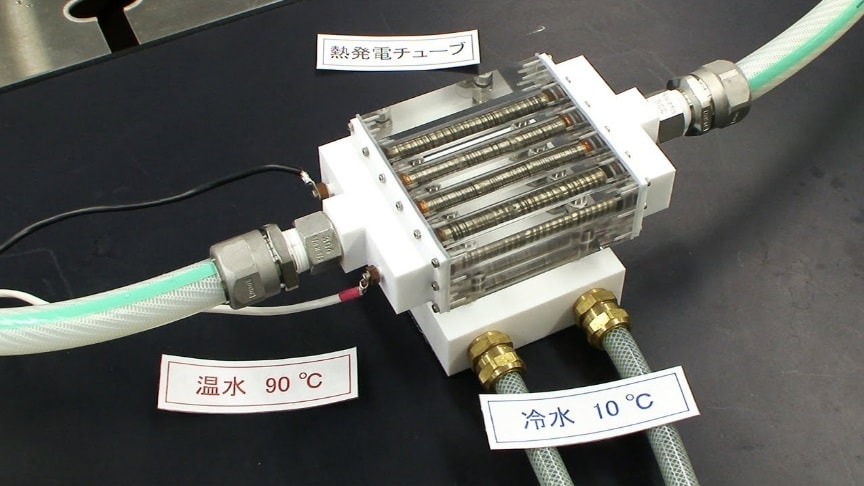 The conversion process relies on the temperature difference between the hot and cold water, and since the entire pipe is used to harness heat, the power output is three or four times higher than previous efforts.In fact, just four four-inch tubes can generate enough electricity to power a portable television, so large-scale installations could result in significant power savings for a buildind.

The performance of power generation is strongly dependent on many parameters such as size of the tube and amount of heat source. Panasonic has developed the simulation technology to optimize the design of the thermoelectric tube in order to maximize the output electric power in accordance with surrounding conditions.

The thermoelectric tube is constructed by stacking conical rings of bismuth telluride as thermoelectric material and nickel as metal. Panasonic has developed processing technologies in fabricating conical rings of brittle thermoelectric materials and bonding rings with minimum parasitic electric and thermal losses.The 10 cm-long fabricated thermoelectric tube using technologies introduced above can generate 1.3 W of electricity by running hot water of 90 °C inside, and cold water of 10 °C outside the tube. The power density corresponds to as high as 10 kW with only 1 m3 of volume./panasonic