The first Rudge Whitworth motorcycle saw the light of day in 1910 and by 1911 the first example to have the remarkably successful, infinitely variable ‘Multi’ gear appeared. The success of the machine and its sound engineering can be judged by its victory in the 1914 Senior TT Race in the hands of Cyril Pullin at an average speed of 49.49mph – the first single-cylinder machine to win a TT. 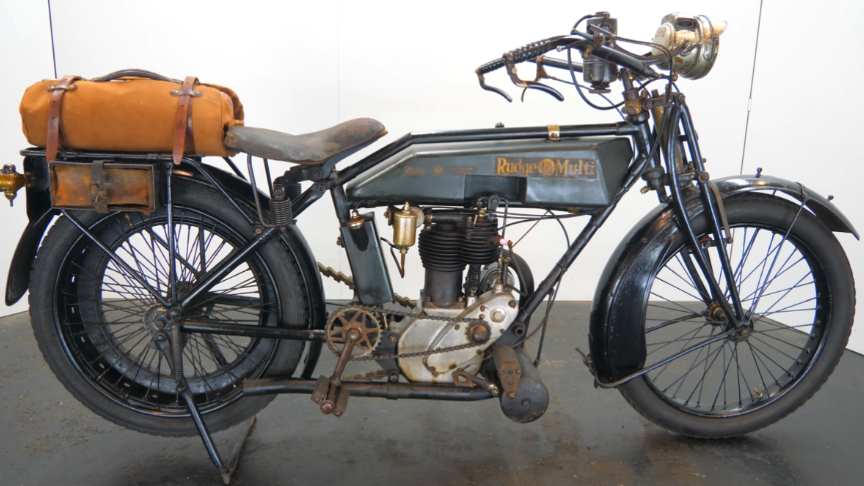 Rudge marketed the TT model in the early 1920’s, featuring sporting drop handlebars and a pedal-operated supplementary oil supply for use when the engine is working hard. Amazingly the clutch is recorded as containing no less than 64 plates. The 497cc engine featured inlet over exhaust valve configuration.

The Multi saw active service in World War I, the Italian Army ordered a batch at the end of hostilities and the Multi was the model selected for manufacture in 1918 to get production underway, to re-finance the Rudge operation. By 1921 Rudge production was running at 30 machines a day and riders such as Bob Dicker and Bill Lacey kept the Rudge name in the headlines with successes at Brooklands and other events.

This bike is impressive part of technical engineering of the early motorcycle history. A ride with this bike with its multi gear “gearbox” is an amazing feeling. This Rudge bears a lot of patina and is fitted with a Lucas acetylene lighting set and Senspray carburetor. It runs well.via/read more: classic-motorcycle.com