French Army captain Cugnot was one of the first to successfully employ a device for converting the reciprocating motion of a steam piston into a rotary motion by means of a ratchet arrangement. In 1770, a full-size version of the fardier à vapeur was built, specified to be able to carry four tons and cover two lieue (7.8 km, or 4.8 miles) in one hour, a performance it never achieved in practice. 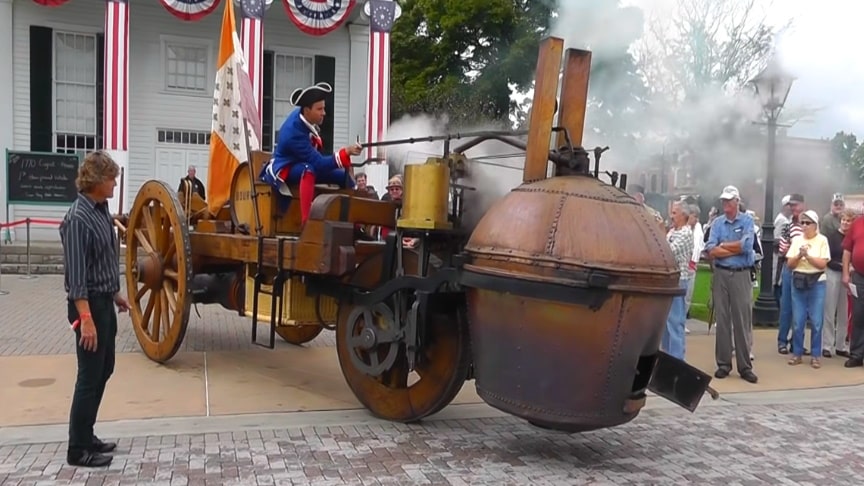 The vehicle weighed about 2.5 tonnes tare, and had two wheels at the rear and one in the front where the horses would normally have been. The front wheel supported a steam boiler and driving mechanism. The power unit was articulated to the “trailer”, and was steered from there by means of a double handle arrangement. One source states that it seated four passengers and moved at a speed of 3.6 kilometres per hour (2.25 mph).

Engine part of Cugnot’s 1770 fardier à vapeur, as preserved at the Musée des Arts et Métiers, Paris.The vehicle was reported to have been very unstable owing to poor weight distribution, a serious disadvantage for a vehicle intended to be able to traverse rough terrain and climb steep hills.

In addition, boiler performance was also particularly poor, even by the standards of the day. The vehicle’s fire needed to be relit, and its steam raised again, every quarter of an hour or so, which considerably reduced its overall speed and distance.