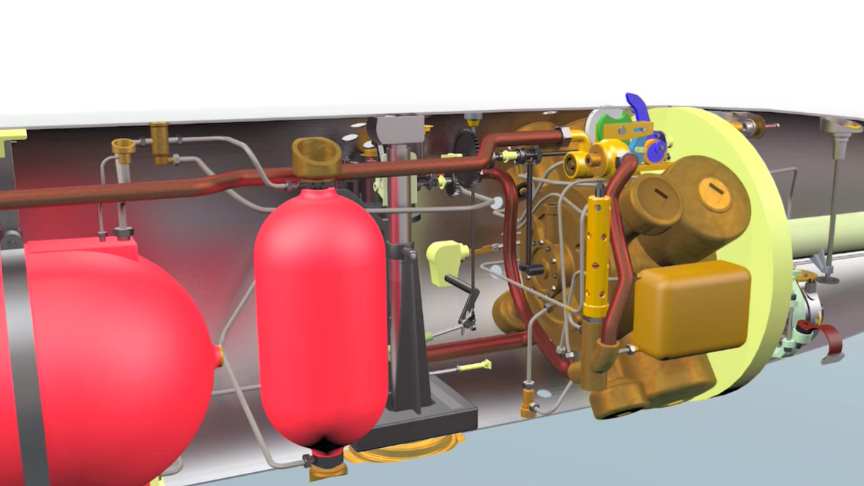 It is a wet – heater design with fuel being burnt in a stream of air before being cooled by a spray of water (which then boils to steam – adding to the volume of gasses delivered to the engine). The 4-cylinder Brotherhood engine was capable of being fired from a submarine’s bow torpedo tube, from Battleship side tubes or from above-water launcher mountings on smaller warships. By adjusting the fuel and air flow rates, the Mk 2 could be set to run fast (44.5 knots) to a range of 4,500 yards, or out to 18,500 yards at 19 knots.

The torpedo was was designed to be launched from a flooded tube. Once the air start valve is opened, the air in the pressure vessel is first reduced to a steady 350 psi and then fed to the engine to turn it over and clear the water in the cylinders and crank case. The pistons have a vent hole that connects the cylinder head and the crank case. The vent hole is closed during the power stroke but open during the return stroke – allowing any water to vent into the crank case.

However, the fuel is not ignited until the engine has been cleared of water (underwater launch) or has had time to enter the water for an above-water launch (the wet-heater Generator and Engine need to be cooled by sea water), so the ignition cartridges are not fired until the engine has rotated a preset number of revolutions using the cold air – this is the Ignition Delay – 4-5 revs for an underwater launch and 20-30 revs for an above water launch. When the fuel is then ignited, the engine accelerates to full power.
Fuel was Shale oil – a light oil with a flashpoint of 71 deg C./via/read more: vbbsmyt