The German G7e electric torpedo was probably the widest used torpedo arming the U-boat fleet during WWI. The original designs for an electric torpedo date back to 1916, and a production version was due to enter service in early 1919, but the end of the Great War and terms of the Versailles Treaty prevented Germany from manufacturing torpedo until 1935. 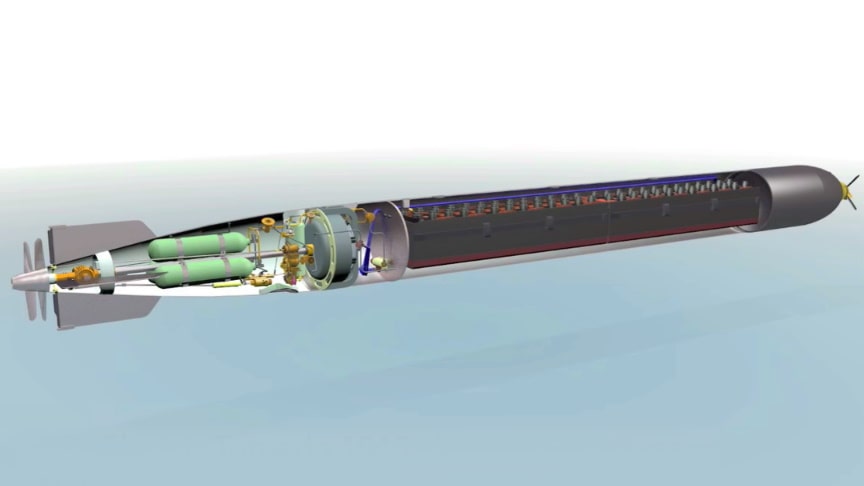 The principal design was the G7a – a conventional 7m long ’whitehead’ air driven wet heater capable of 45 knots for a range of 5,000m, but this model was expensive to build and required highly skilled workers. The Electric version used used many of the same parts – gyro, depth control, warhead and pistol/exploder. However, it was only capable of 30 knots for a range of 5,000m if the batteries were pre-warmed to 30 deg C, and significantly less when launched with a cold battery. Nevertheless, it was ideal for submarine warfare.

This animation is intended to show what the G7e looked like and how it worked. However, as at the publication date, I have not been able to locate all the drawings needed especially the layout and operation of the motor compartment, so it is work-in-progress, and contains a number of (I hope) intelligent guesses that will be corrected when more information is available.

This work-in-progress model also focuses on the basic G7e control gyro. Later G7e versions were capable of pattern running (FAT) or circling, including the ability to be set to follow and zig-zag across a convoy of ships (LUT). Acoustic homing torpedoes were also developed to home on propeller noise./vbbsmyt