“EAA’s rebuilt prototype of the classic Aerocar represents a revolutionary concept. Not only can it be readily converted from an airplane to a roadable car, but also its wings can be folded back along the sides of the detached fuselage and towed behind the automobile like a trailer.Thus, it is not necessary to leave its wings, tail and propeller at an airport for it to be driven on the highway, and one does not have to return to the same airport in order to fly again”.via:EAA 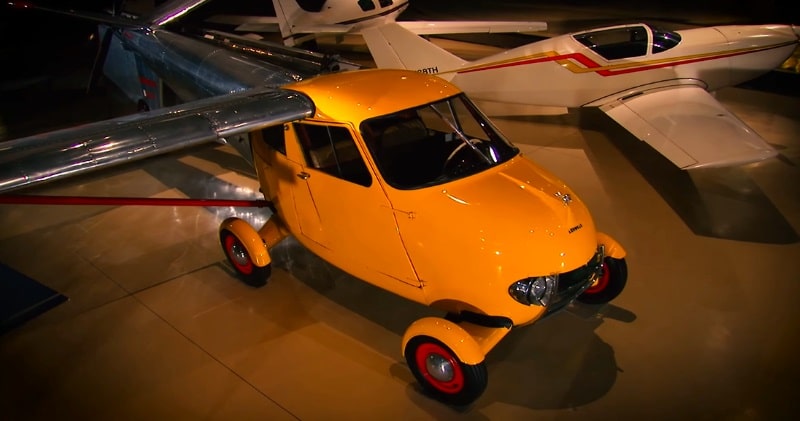 Aerocar International’s Aerocar was an American roadable aircraft, designed and built by Moulton Taylor in Longview, Washington, in 1949. Although six examples were built, the Aerocar never entered production./Watch the video by EAA.

The utilized folding wings of Aerocar allowed the road vehicle to be converted into flight mode in five minutes by one person. When the rear license plate was flipped up, the operator could connect the propeller shaft and attach a pusher propeller./wikipedia

The same engine drove the front wheels through a three-speed manual transmission. When operated as an aircraft, the road transmission was simply left in neutral. On the road, the wings and tail unit were designed to be towed behind the vehicle. Aerocars could drive up to 60 miles per hour and have a top airspeed of 110 miles per hour./wikipedia