The legendary scooter company made an economy car. This 1958 Vespa 400 is a 2 stroke 2 cylinder 2 seater with roll top roof and suicide doors. Over 30,000 were produced!The 400 was a two seater with room behind the seats to accommodate luggage or two small children on an optional cushion. 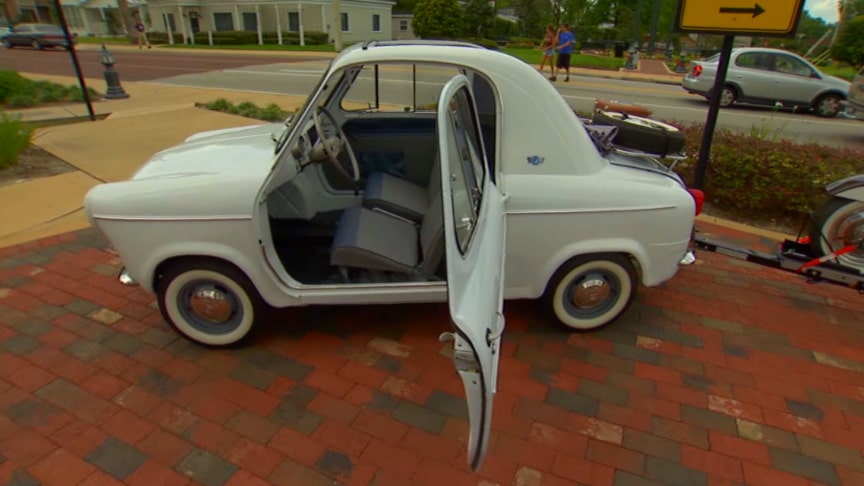 The front seats were simple tubular metal frames with cloth upholstery on elastic “springs” and between the seats were the handbrake, starter and choke. The gear change was centrally floor mounted. The rear hinged doors were coated on the inside with only a thin plastic lining attached to the metal door panel skin allowing valuable extra internal space.

The cabriolet fabric roof could be rolled back from the windscreen header rail to the top of the rear engine cover leaving conventional metal sides above the doors. The 12 volt battery was located at the front of the car, behind the dummy front grill, on a shelf that could be slid out. The spare wheel was stowed in a well under the passenger seat.

The car was powred by two cylinder, two stroke, air cooled engine. Bore, stroke: 63 mm x 63 mm (393 cc). Motor cyclists at the time were used to mixing oil into their fuel, but the manufacturer belatedly realised that this might compromise the 400’s standing as a “car”, and from the summer of 1958 “two stroke oil” was held in separate reservoir with a semi-automatic dispenser on the right side of the engine bay./wikipedia