In this video I check out “Night Train” a 1968 Chevrolet C50 Custom Crew Cab Car Hauler I found at the 2019 SEMA Show Las Vegas NV.When I first laid eyes on it I thought wow! that’s cool.But when I found out what I was looking at I was like WOW THAT’S COOL!!.See Chevrolet never built a quad cab C50 Heavy Duty truck until 1973. 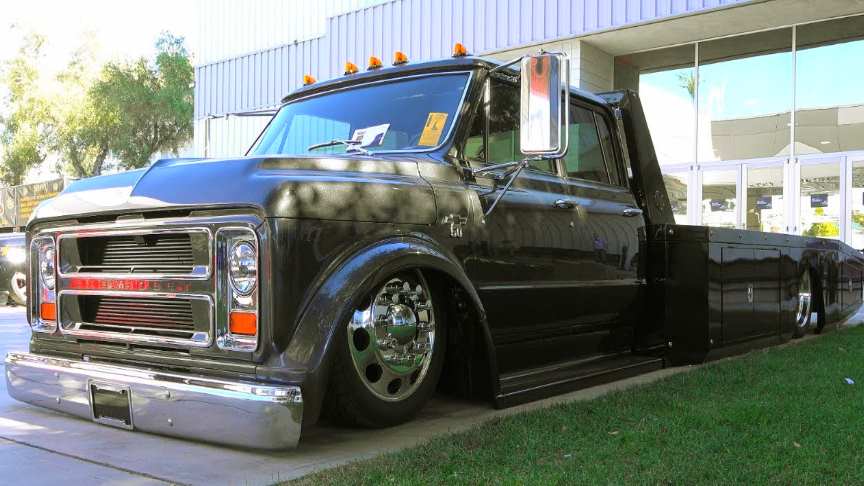 What We have here is a 1970 Chevrolet Suburban and the front end of a 1968 Chevrolet C50 Heavy Duty truck.And to say they pulled it off would be a understatement.That much fabrication and You don’t see any of it.Make no mistake there is a ton of fabrication work done to make this 1968 Chevrolet C50 Custom Quad Cab Car Hauler that I found at the 2019 SEMA Show.but if You don’t know.You won’t see it.

The interior is all custom of course.But not over the top kinda custom.But more like a very nice top of the line interior You could get from in a Modern Truck.Dark grey paint covers the custom body work.It’s running Big semi wheels.I mean very cool and what else would you run?.

Laying on the ground they have the stance right.Under the custom hood…The late model Duramax Diesel Engine..And before anyone says anything…It does and will haul cars.It hauled one to The 2019 SEMA Show.I’m really into the custom trucks.And I really dig custom Heavy Duty and SEMI trucks.I think this one is way cool for sure.