In this video from the 2021 NSRA Street Rod Nationals held in Louisville Ky I catch up with Justin Nichols of Nichols Paint and Fab with this 1969 SAAB.smh.Put this one in the never say never file for both Justin and I.Justin tells Me when the client first showed up at the shop and asked if they would be interested in building a 1969 SAAB.He quickly replied.NO!!!.But after He looked at what they were wanting to build.He was in with both feet!!.This is no restored euro compact car. 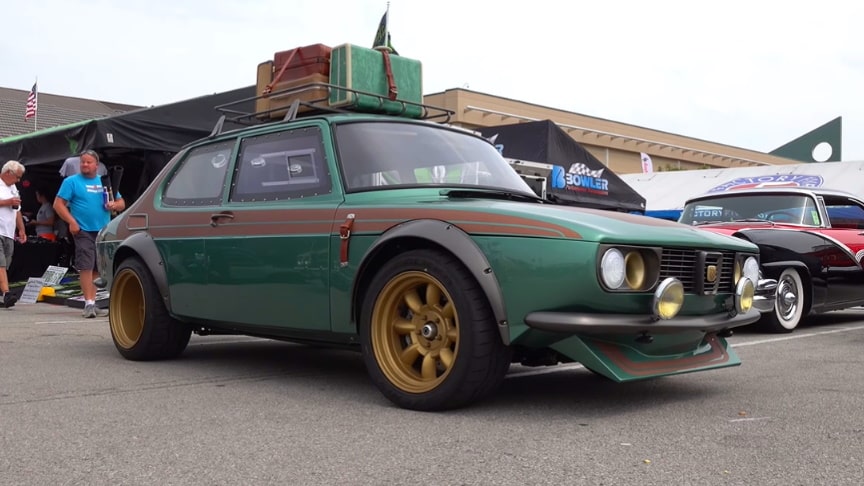 It’s a complete custom built.Street.Rally and Tarck Car.They did stick to the original style of the car. It’s covered in a medium green color paint with satin brown accents and graphics.There is a ton of custom touches.The chassis is all custom and they moved the Ford 4cyl Ecoboost back to give the car a 50/50 weight distribution.

Mated that to a 5 speed transmission.The interior is all custom and You would never guess that the Engine has been relocated.Very clean fabrication work and the interior fits the rest of the build perfectly.Wheels are a personal choice and no one set will please everyone.The ones Nichol’s Paint and Fab chose to run on this 1969 SAAB from the 2021 NSRA Street Rod Nationals.

Work well with the rally car part of the theme they have going on with this one.I never thought that I would be featuring a 1969 SAAB but it doesn’t surprise Me that Justin and the crew are the ones to build it.They know cool and are not afraid to get outside the box.I’m sure You will dig this 69 SAAB./ScottieDTV