“We had the chance to go out and take a look at this 1 of 3 1974 Ford C750 truck and Gerstenlager trailer that were outfitted as a Camelot Cruiser motorhome by Edler & Company of Skokie, Illinois. The pair are said to have remained in long-term storage and was subsequently recommissioned before being acquired by the selling dealer in November 2022.”// Ford Era 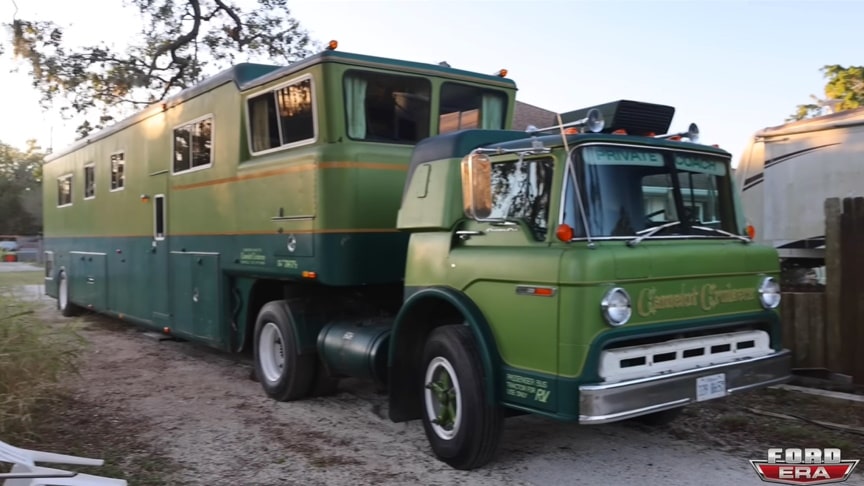 Power is from a 391ci V8 paired with a four-speed automatic transmission, and both the truck and trailer are finished in two-tone green. The truck is equipped with a chrome front bumper, 22.5″ steel wheels, air-assisted brakes, dual air horns, a CB radio, a sleeping surface, and an intercom system. Watch the video from Ford Era for full review:

The trailer features woodgrain paneling, a kitchenette, a dinette, a bedroom with a double bed, a bathroom, a sitting room, and two basement cargo compartments. Service under prior ownership reportedly involved overhauling the carburetor, cleaning and coating the fuel tanks.

Repacking the wheel bearings, and replacing the fuel pump, ignition components, tires, wheels, shock absorbers, brake air reservoirs, trailer suspension air bags, and shore hookup power cord. This C-750 and Camelot Cruiser trailer are now offered in Osprey, Florida, with a pair of Poloron snowmobiles, clean Montana titles for the truck and trailer, and a bill of sale for the snowmobiles.