A mortar is usually a simple, lightweight, man-portable, muzzle-loaded weapon, consisting of a smooth-bore metal tube fixed to a base plate (to spread out the recoil) with a lightweight bipod mount and a sight. They launch explosive shells in high-arcing ballistic trajectories. 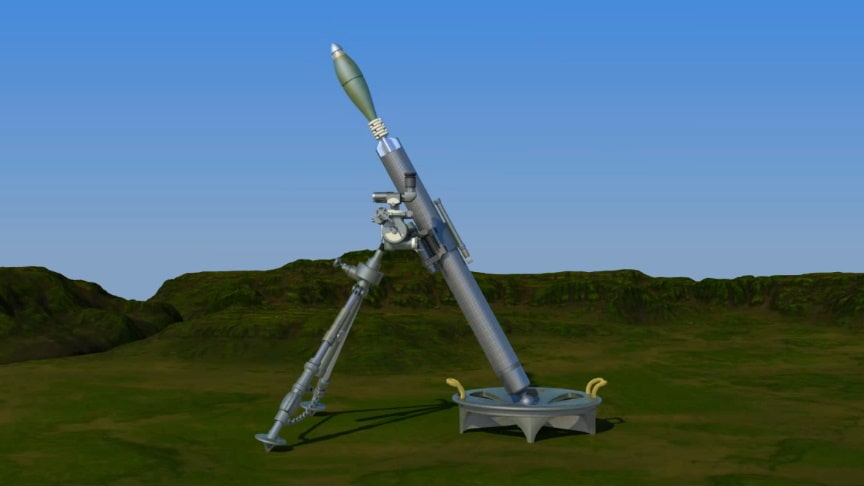 Most modern mortar systems consist of four main components: a barrel, a base plate, a bipod and a sight. Modern mortars normally range in calibre from 60 mm (2.36 in) to 120 mm (4.72 in). However, both larger and smaller mortars have been produced. It consists of a barrel into which the gunners drop a mortar round. Watch the video from bRd 3D(ENG) for more info:

When the round reaches the base of the barrel it hits a fixed firing pin that fires the round. The barrel is generally set at an angle of between 45 and 85 degrees (800 to 1500 mils), with the higher angle producing a shorter horizontal trajectory.

Ammunition for mortars generally comes in two main varieties: fin-stabilized and spin-stabilized. Examples of the former have short fins on their posterior portion, which control the path of the bomb in flight. Spin-stabilized mortar bombs rotate as they travel along and leave the mortar tube, which stabilizes them in much the same way as a rifle bullet. Both types of rounds can be either illumination (infrared or visible illumination), smoke, high explosive and training rounds./wikipedia