The Villar Perosa, the first submachine gun, was named after the plant in Italy where it was made. It was invented by Captain Abiel Revelli and patented on 8 April 1914. It had unprecedented characteristics for the time, combining the frightening rate of fire of machine guns with the ability to be moved like a light weapon. It could be transported by a foot soldier, mounted on a bike and even on an aeroplane. 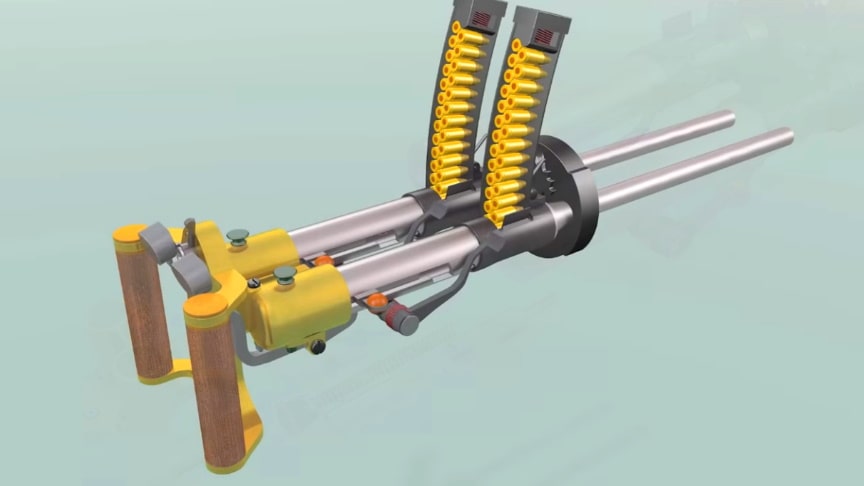 The VP consists of two independent guns bolted together. Each gun can fire at 1,500 rounds per minute, but as they were fitted with a 25-round magazine, all would be discharged in one second. The gun fired a 9mm Gliscenti round, – having the same dimensions of a Luger Parabellum but less power. The sights can be adjusted in 100m steps out to 500m, but I wonder if the bullet could reach that far!

The tactical use of this new type of weapon took some time to be developed. Initially it had a heavy steel shield, which was discarded in favour of a bipod or even a wooden stock. In this animation it is also mounted on a Voisin 3 light bomber.

During the early days of the War, the 9mm round could be quite effective against the lightweight aircraft of the time. However as the War progressed it was outclassed and replaced by more powerful guns, such as the Fiat-Revelli rifle-calibre machine gun. The VP was phased out in 1917. Animation created using Cinema 4D. Music credits are shown at the end of the movie./vbbsmyt