In 1953, the USSR started the development of a new type of heavy-lift helicopter.Both Mil and Kamov were selected to come up with designs and the race was on to develop what would be at the time – the worlds largest helicopter. Its requirements would be simple – BIG, FAST and POWERFUL.Kamov would base its design on the Bratukhin B-11. They figured that if the twin-rotor helicopter was larger, you could fit two horizontal propellers under the wings – and ta da! a monster helicopter to inspire fear in the west! 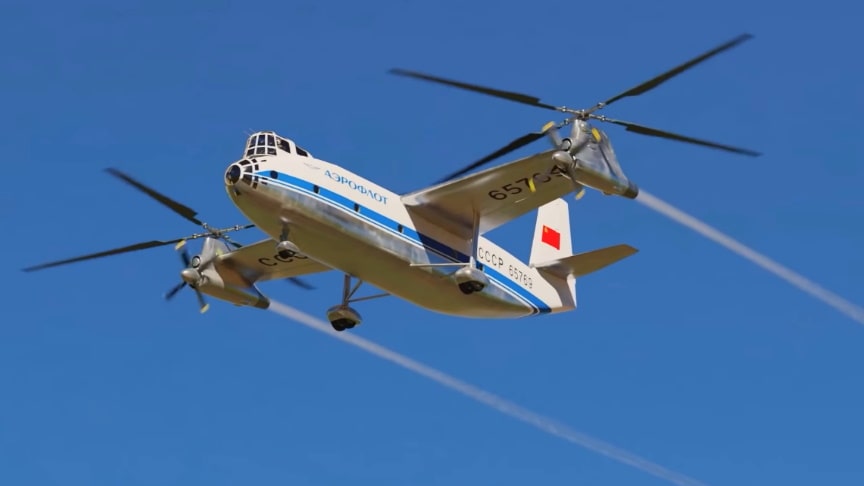 Heres how it would have worked!The Ka-22 would have two large engines fixed on each wing tip. These engines would power both a four-bladed propeller and a four-bladed main rotor – operating them for either vertical or horizontal flight. Not at the same time however. During vertical flight, the horizontal propeller would be disconnected – then when switching to forward flight, the rotors were allow to spin naturally but were left witout power./https://www.youtube.com/watch?v=3a6sK6DENH8

These engines on the wingtips would be badass, having up to 5,900 horsepower. These blades would push the aircraft up to a planned 400 km/h – although during tests it only achieved a still impressive 356km/h.The four crew cockpit would sit above the nose of the aircraft, with seating for a futher 80 soliders in the rear. If not men, the KA-22 would be able to carry 16.5 tons of bulky cargo – with the nose of the aircraft swinging open at airfields of quick loading and unloading.

Kamov had one more design that would be the fastest, biggest helicopter ever built. In 1967, the Kamov Deisgn Bureau decided to have another crack at the Gyrodyne concept with a project simply called the Kamov Ka-35D. This version would be huge, and was designed to work in tandem with the impressive An-12.The big difference between the KA-22 and this monster was its twin turbojet eninges. This would increase its speed to 550 km per hour, and its lifting capacity to over 20 tons./Found And Explained