A 3D animation showing how an AR-15 works.The Colt AR-15 is a lightweight, magazine-fed, gas-operated semi-automatic rifle. It is a semi-automatic version of the M16 rifle sold for the civilian and law enforcement markets in the United States. 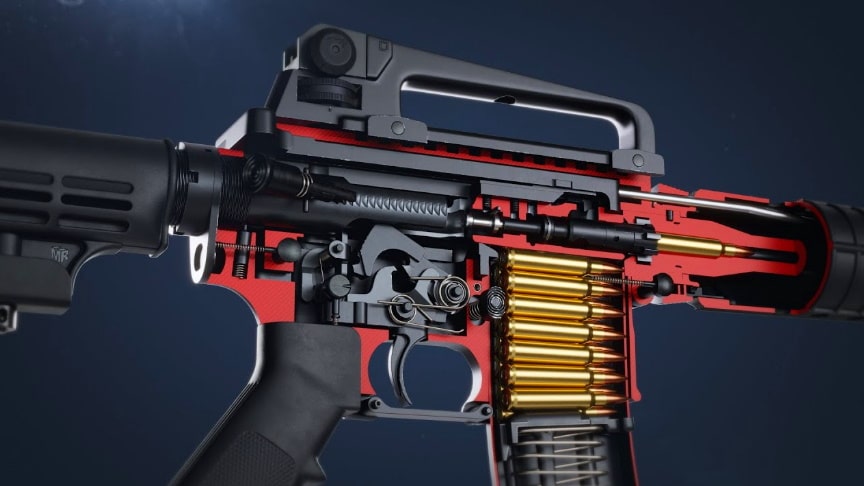 The bolt carrier acts as a movable cylinder and the bolt itself acts as a piston. This mechanism is often called “direct gas impingement”, although that is now considered to be a misconception.The mechanism is now modernly referred to as an, “Internal gas piston operating system.” Watch the video from Matt Rittman for more info:

Once the bolt is fully unlocked it begins its rearward movement along with the bolt carrier. The bolt’s rearward motion extracts the empty cartridge case from the chamber. As soon as the neck of the case clears the barrel extension, the bolt’s spring-loaded ejector forces it out the ejection port in the side of the upper receiver.

Behind the bolt carrier is a plastic or metal buffer, which rests in line with a return spring. The buffer spring begins to push the bolt carrier and bolt back toward the chamber once it is compressed sufficiently. A groove machined into the upper receiver guides the bolt cam pin and prevents it and the bolt from rotating into a closed position. The bolt’s locking lugs push a fresh round from the magazine as the bolt moves forward./wikipedia