In 1968, Charles Bello and his wife, Vanna Rae, moved onto 240 acres of redwood forest looking to live a simpler life off the land. They had spent their savings to purchase the land so they got to work building their home themselves. Their first structure was a panelized A-frame that they erected in 5 days (with help from a couple family members). Total cost was $2,800. 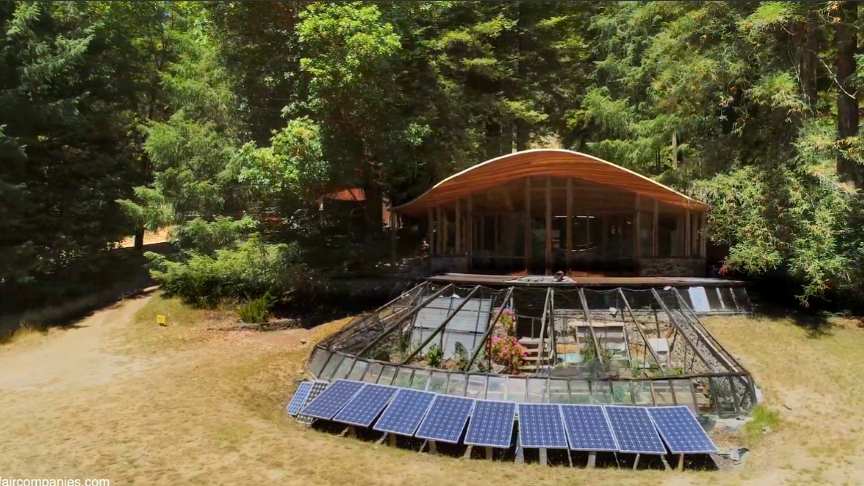 The property is a half-hour drive down a dirt road and it was bare land when they arrived so Charles and Vanna Rae built their own infrastructure: roads, bridges and went decades without refrigeration nor phone (they eventually installed PV panels and cabling for phone lines). Kirsten Dirksen

After 15 years in the A-frame, they built a cabin in the woods and there they lived for a decade until the trees began to block out their views. In 1991 Charles (who once apprenticed under famed architect Richard Neutra) designed the Parabolic Glass House. With a curvilinear wood roof and two curved walls of windows, the home feels enveloped in trees.

Charles and Vanna Rae built it for $8,500 with timber they milled themselves, using salvaged materials for everything from doorknobs to stoves. The couple relied on photovoltaics, solar thermal and gas for power and a dug-in greenhouse attached to the home provided much of their food. By canning and preserving, they could go for months without going to a grocery store. Their two boys were homeschooled. The couple supported themselves selling Christmas trees.via/read more: Kirsten Dirksen