Getting sideways isn’t a problem when you’ve got 10 ton on deck! Watch this 1000HP Russian-made Kamaz Dakar Rally Truck wreak havoc on the Goodwood Hillclimb during the Festival of Speed 2019. This beast is moved by the 12.5 liter turbodiesel V8 engine which is able to produce a whopping 1000hp horsepower! 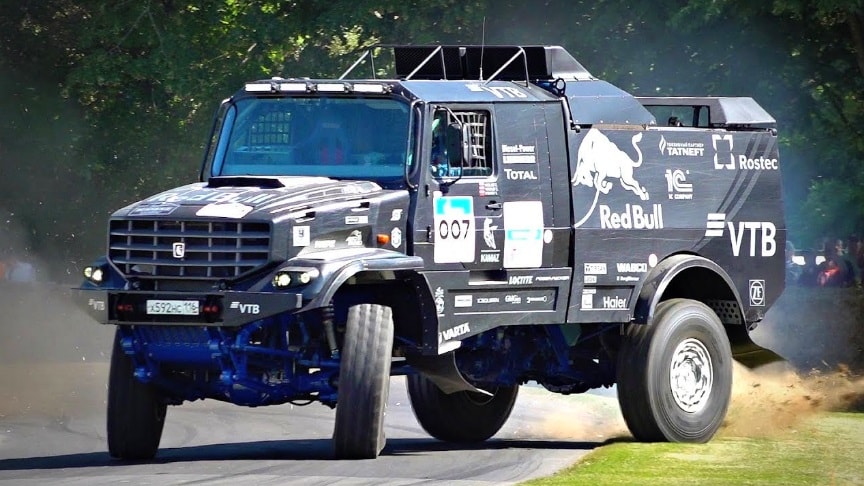 The Kamaz Dakar rally truck was built to not only drive in the hottest deserts on the planet but also race in them. And Kamaz should know: they’ve won the Dakar rally 16 times in the truck category.

Built by Russian truckmaker Kamaz, the Dakar-version is based on the Kamaz-4326 chassis but specially modified with bigger brakes, off-road tires, enormous suspension, and a rear spoiler. It also sports an extended nose to make room for the 12.5-L diesel engine under the hood.

Power is rated at 980 horses. A 16-speed automatic ZF transmission provides power to all four wheels, allowing it to reach speeds of over 100 mph. The back is mostly a giant 1,000-liter fuel tank so that the rig doesn’t run out of gas halfway into the Sahara.The crazy part about this thing is that it’s nothing short of a massive machine. Similar in size to an average box truck, one probably wouldn’t expect a machine of this magnitude to be able to rip around a course, let alone drift it.