This is the incredibly rare moment a leopard battles a crocodile to take its carcass out the water! When you get to a sighting of a crocodile and a leopard standing off you can be sure that the experience will pack an exhilarating punch of action, so get your camera rolling! This sighting was captured by Alberto Scattolin, the 54-year-old owner and guide of Matimba Lodge. He enjoys going to the Kruger in the late afternoon to be on the lookout for new wildlife experiences. 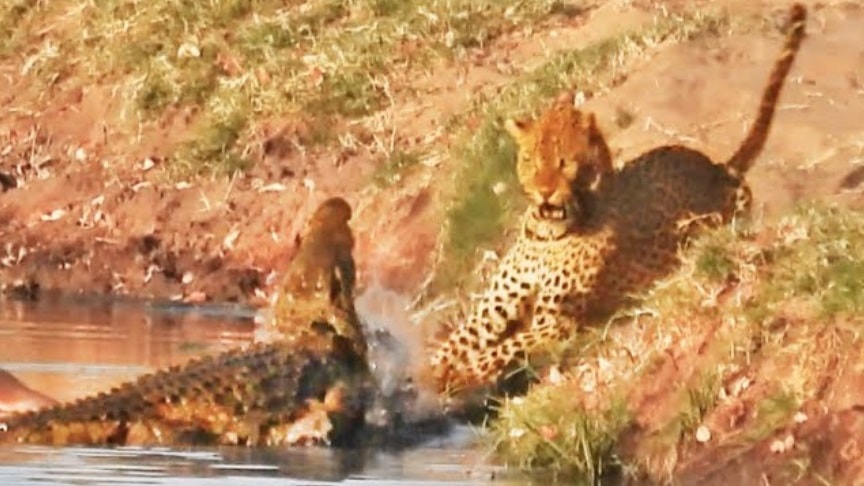 He is a long-time app member and shares all of his incredible sightings with us in real-time! Last week, on the 7th of October, he witnessed this incredible sighting at Ngobeni Loop in the H14 which is a spot quite famous for its leopards. Alberto tells LatestSightings.com about this sighting: “This afternoon was no different than any other late afternoon drives in the Kruger. via/read more: Kruger Sightings

“I arrived at this waterhole and spotted a crocodile feasting on a carcass in the water. But out of nowhere, a leopard appeared spotted the potential free meal. He immediately started approaching the water where the crocodile was.”…

“I stayed and watched as the hungry leopard tried to take the meal from the croc repeatedly. The croc had none of it though and protected the meal by lashing out at the leopard with snapping jaws each time it came close enough to almost become a meal itself. I’ve seen a similar situation before, but never anything as intense as this.”.The sighting ended when I had to leave since the gates were about to close. This was the most amazing interaction with these two animals I’ve ever seen.”/via/read more: Kruger Sightings