Jérémie Malvy bought an old cargo riverboat for 11,000 euros and then spent two years remaking it into a light and plant-filled modern home. For Malvy, the home – now docked on the Seine on the outskirts of Paris – is another step on his journey from his home in Pakistan to France. 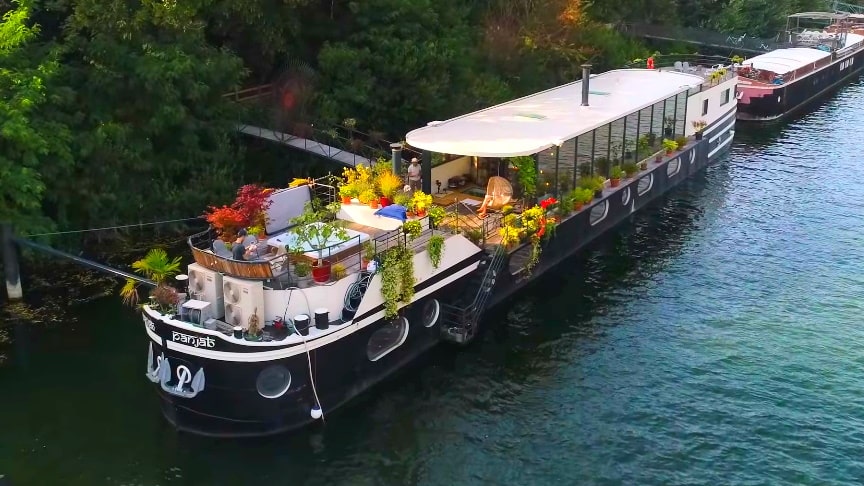 It began a couple decades ago when Malvy arrived in Paris with no resources and no words of French, so he lived on the street – often under bridges of the Seine – and spoke to the river.After finding success with a chain of organic grocery cooperatives and restaurants, he decided to build his dream home from a retired cargo boat that once carried grains.

Not wanting to lose his strong connection to the river, he remade the boat with an all-glass front and only plants between his living room and the water. The downstairs is half-buried in water, which provides excellent acoustics and insulation; it also provides an eye-level view of the water (and the ability to open a window and touch the river).

Today, Malvy lives aboard full-time with his wife Sara and the entire home is filled with plants. Malvy says this constant connection with water and nature means that once he steps aboard all his stress floats away within minutes. Renamed Panjab (Punjab) for Malvy’s home region in Pakistan, the boat no longer has an engine, but if the couple ever wanted to move it they could simply get a tug./Kirsten Dirksen