In this video from Zareba®, North America’s largest producer of electric fencing supplies, we’ll show you the flow of electric current on the fence to see how the process works.Starting at the fence charger, electric current is fed into your system by either an AC power outlet or battery on your DC or solar charger. This current is then built up through a series of transformers inside your fence charger which takes that electricity and converts it into a higher voltage charge. This higher voltage charge is what is released to your fence lines from your charger’s fence terminal post and wire connection. 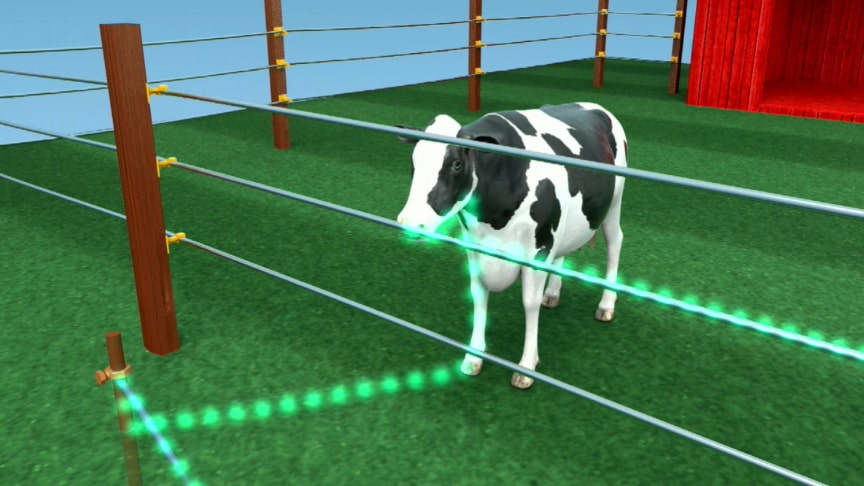 Fence chargers are designed with two external terminals to intentionally create separation in the electric circuit. Electricity enters the fence circuit on the “hot” fence terminal, and completes the circuit when it’s collected by the ground rods and sent up to the ground terminal from your connecting ground wire.

This ground terminal on your charger is just as important in delivering an effective shock to your animal as having a strong output voltage on your fence charger. The main objective a charge has coming out of a fence charger on the fence line terminal is to find the shortest connecting path to that ground terminal to complete the circuit.

The objective, then, of an electric fence system is to only allow one successful point of circuit completion for that current, and that successful point of completion happens when an object touches the “hot” wire and the earth at the same time. This could be your animal, a branch shorting out the wire, or you may have been the lucky one to complete this circuit once or twice. This is also why birds don’t get shocked on fence lines … they don’t have a contact point with both earth and the wire.via/read more: Zareba Systems®