Jenna and David Jonas have spent most of their lives living off the land. At 17, David built a cabin in the woods of Vermont without power tools and lived there for two years, learning to track animals, identify trees, plants and birds, and to navigate. He’d paddled thousands of miles in hand-built birch bark canoes and lived for months off wild foods alone when he met his neighbor Jenna (she lived across the creek from his cabin in a “treehouse” dwelling), who’d been exploring the interior of Alaska for few years by boat, ski, dogsled, bike, and foot. 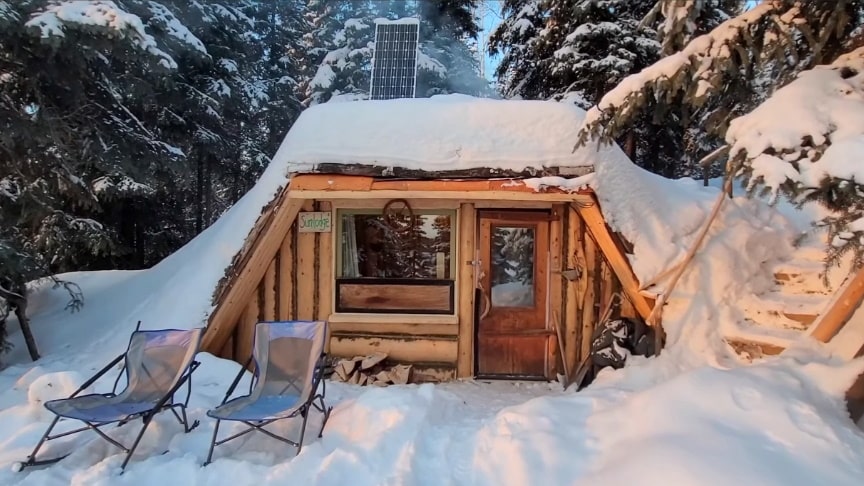 In 2012, they found an ad on Craigslist for private land surrounded by state forest on a bluff above the Tanana River. They saw the potential for year-round food sources and bought the raw land, first living in a fishing tent, before building a wall-tent and then a more permanent earthlodge.

After two years on the land, they spent 3 weeks building a more permanent earthlodge: digging deep into the hill to take advantage of the relative warmth of the earth, using plentiful birch trunks to line the home, covering it in sod for insulation and facing it due south for passive solar gain.

Two years later, they began building a traditional log cabin using hand tools (such as a gin pole for a crane). It took them 3 years to complete (building only before freeze-up), but was ready in time for the arrival of their daughter.The couple hunt, forage or grow most all of their food. They built a smokehouse to cure the meat and fish, and an underground root cellar to preserve their produce and potatoes throughout the year./Kirsten Dirksen