The Saab 107 was a proposed series of small airliners that were intended to be manufactured by Saab AB of Sweden, but were never built.Project SAAB 1073 was intended for passenger and freight transport on somewhat longer domestic lines between airports that offer runways of 1200 m length or more. 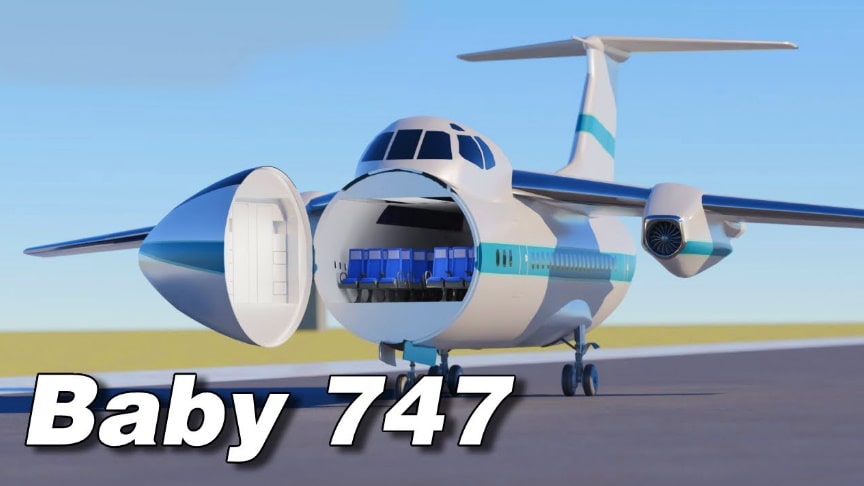 For this, the STOL requirement was less severe and for a better cruising economy the design featured two turbofans in nacelles under the high wing which had a moderate wing sweep. The T-tail kept the elevator out of the exhaust jets. The intended turbofans were in the 10,000 lb-thrust class (Rolls-Royce Trent) and the passenger capacity amounted to 87.

The Saab 1037 was created to bring jet travel to the smaller regional market, but take full advantage of the idea of nose swinging door.When at an airport, the door would open completely swinging 90 degrees and allow passengers to instantly walk right off the plane, or if a cargo version, allow the pallets to be loaded in a continuous train.

This would mean that the cockpit would be situated above the main hold, and give it its mini 747 design. It was designed to carry around 87 passengers, up to a range of 2414 km or 1300 nautical miles. This was a short range, but it was actually made for shorter hops, taking off, flying roughly 500 nautical miles and then landing again, about an hour flight between destinations ferrying passengers from regional centers to hubs./Found And Explained