With a wingspan greater than a Boeing 747, The Bristol Brabazon was the largest aircraft ever built by Britain. More a flying oceanliner than plane, it featured sleeping cabins, a dining room, a cocktail bar and lounge, and even a 23 seat movie theater. 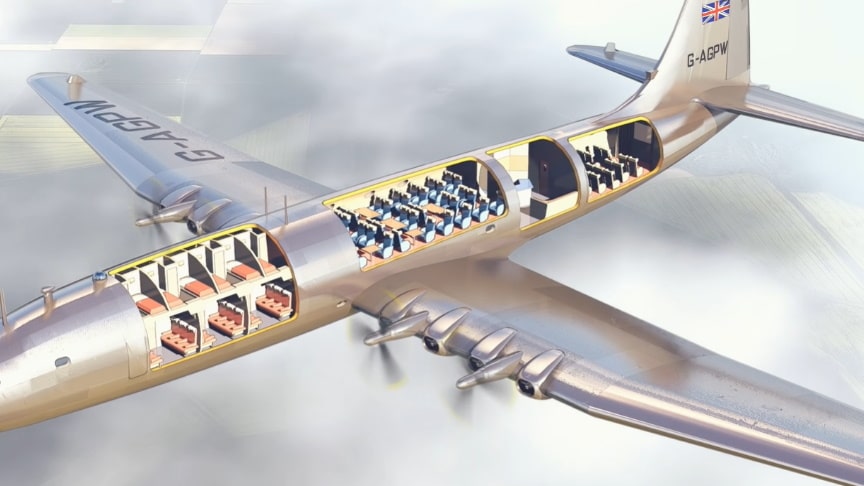 The Brabazon was also fitted with cutting edge innovations. A fully pressurized, air conditioned cabin. Electric engine controls, and high-pressure hydraulics to operate its massive control surfaces. It’s enormous wing housed more than 16 thousand gallons of fuel, and eight of the most powerful piston engines available. While the first Brabazon used piston engines, later Brabazon were to use turboprop engines that were being developed by Bristol. Watch the video from Mustard:

The Bristol Brabazon would have true transatlantic capability. Able to fly non-stop from London to New York against prevailing eastern winds. In the 1940’s, this would have been quite the feat. Transatlantic flights were almost always done in stages to allow for refueling.

Despite introducing new innovations, many of which influenced the future of aviation, the Brabazon’s driving philosophy was outdated. The Brabazon’s mission was to compete with ocean liners for ultra-wealthy passengers. After a massive design and development effort, Britain found itself stuck with a plane nobody actually wanted, designed for an era that no longer existed.The program was cancelled and the Brabazon, and half finished turboprop successor were sold for their weight in scrap.via/read more: Mustard