With the wet season at it’s peak, a shelter was needed to keep tools and materials dry as well as providing a dry work-space for future projects. So after some procrastination, I decided on a low roof design. A 2.5 m by 2.5 m hut with a ridge 2 m above the ground and side walls 75 cm high. Upright posts were put in at about 60 cm intervals along the 3 walls.via: Primitive Technology 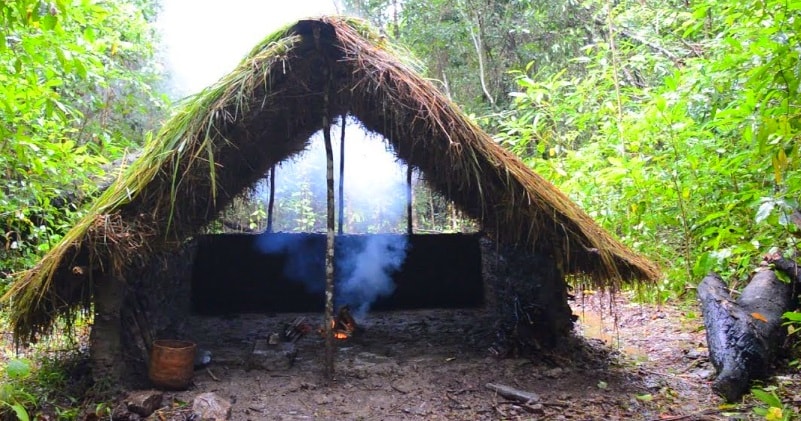 The front was left open as this is more of an open workshop than a dwelling. Grass was collected from high up in the hill as it will not grow in the darker, lowland forest. Carrying the thatch to the hut was the most labor intensive part taking approximately 36 hours over the course of more than a week./Primitive Technology

The walls were then coated in soft, grey mud from a nearby clearing. The floor was coated in the same material. A large amount of rain fell due to a nearby tropical cyclone passing to the north. Despite this there were only a few leaks (mainly on the ridge line) that were subsequently patched with more grass.

A fire was then lit with fire-sticks despite the damp conditions. This was done to help dry the mud walls and floor. The end of the video shows the yam mounds behind the hut doing well from of the torrential rain. The shelter will suffice for the remaining two months of rain that is expected to fall.via: Primitive Technology