“I smelted iron bacteria in a short furnace and produced a small quantity of iron prills (small iron spheres).I began by making a very short furnace. A pit 25 cm wide and 25 cm deep was dug and the tuyere of the forge blower placed in a 15 degree downward angle into the pit. Iron bacteria from the creek was gathered and brought to the smelting hut for processing.” via: Primitive Technology 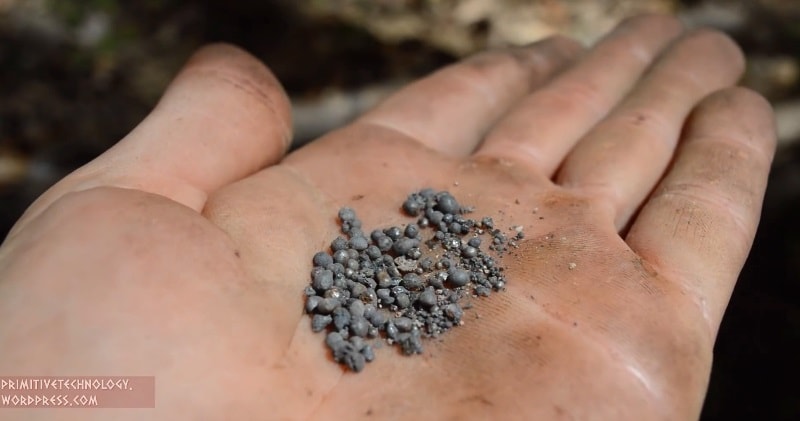 Charcoal was ground into a powder and mixed with the ore and water in the proportions of 1:1 char to ore by volume. This mixture was formed into 59 pellets 2.5 cm in diameter and then dried on top of the furnace.To make the smelt, a wood fire was made in the furnace and allowed to burn for about an hour by natural draft and blowing.

Charcoal was then continuously added after the last charge until the basket was empty. It took a total of about 3 hours working the blower until the operation ended.The mass of slag and iron prills was prized out of the furnace using a log and wooden tongs. It was hammered flat while hot but no large bloom was made. Instead many small iron prills were found. These mostly seemed to be cast iron.via: Primitive Technology