In this video from the 2020 Ford F-100 show held in Pigeon Forge Tn I caught up with this 1968 Ford F100 Pickup.The truck has been in the family since 1971.It served as a work truck for many years and was give to the current owner when He turned 14.He drove it until He went off to school.It sat for many years and had started to get into bad shape. 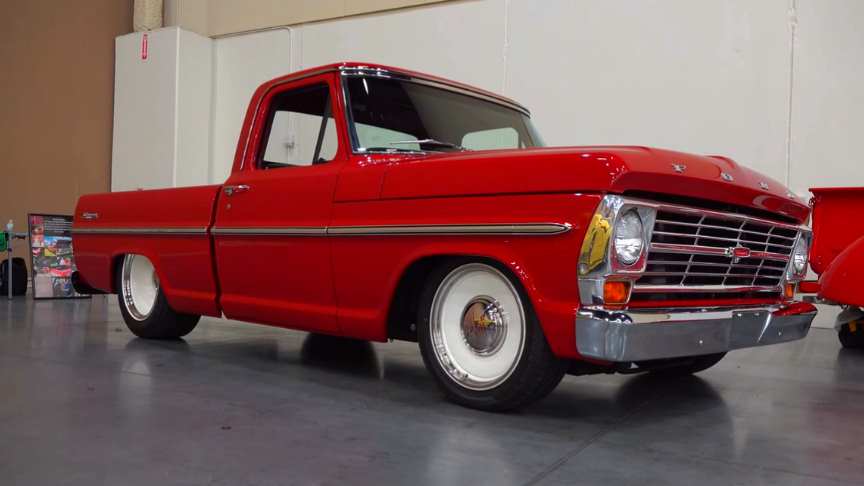 Dad was always asking “What are You going to do with that old truck?”.The current owners answer is the same as many out there with more ideas than money.Turn it into a cool truck one day Dad…Then one day they found out that Dad had some serious medical issues and that if the truck was going to get done with Him involved..Then the time had come.

So as a Family they worked through getting it to where You see it today.He tells Me many hours were spent talking about what to do next on this truck in a time all they could think about was their Dads health.Cool how machines can do that for car people.Covered in a red paint that it wears very well.The truck is not really custom..Just a very cool driver and show winner I’m sure

The interior has been redone…But it looks like a very nice stock interior.Wheels are always a personal choice.I’m good with the white steelies they chose to run.Give the truck a clean understated look. Under the hood…Well I’ll let Him tell you about that..lol.I’m cool with it.But some may not be.This is one very cool 1968 Ford F100 Pickup from the 2020 Ford F100 show.Built to drive and put smiles on peoples faces./ScottieDTV