In this video from the 2022 Goodguys Summit Racing Nationals held in Columbus OH, I catch up with the Miranda Built 1969 Pontiac GTO.”Over Lord” I really dig this generation Pontiac GTO and it always makes Me smile to see one done to this level and in the Street Machine,. Pro Touring Style. It’s covered in a two tone brown paint scheme with a gold pinstripe, If someone described that to Me I wouldn’t have thought I would like it. 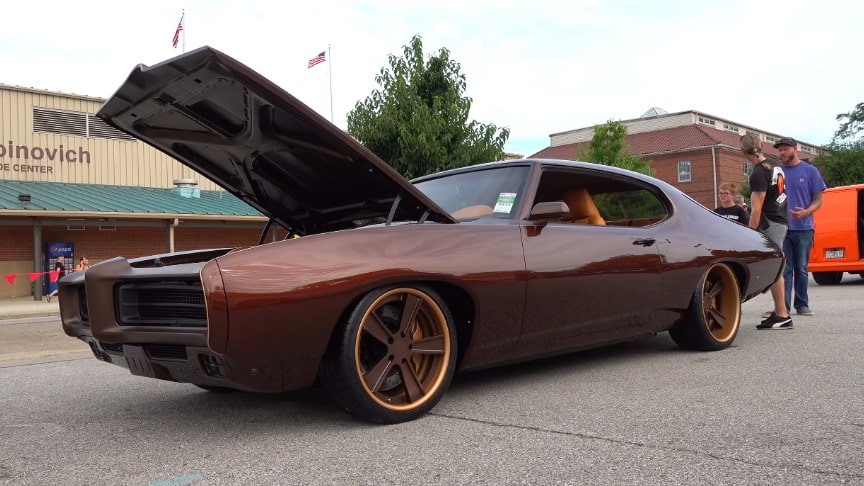 This 1969 Pontiac GTO wears it perfectly.The way they chose to cut the two tone paint edge.Is very cool IMHO. The Tan? colored custom leather interior is the frosting on the cake to this Miranda Built 1969 Pontiac GTO from the Goodguys Summit Racing Nationals. The overall look of this Pontiac GTO is on the aggressive side.it also has to crazy side that shows in some places.

The interior is just to that edge of “over the edge” without going over.The perfect touch of modern.Over the top Custom and high end luxury.I really love the interior! Under the hood is a reworked LS1 and a very clean install.This 69 Goat was built to drive, so there is not any custom panel.

Just a color match engine and the wires it takes to make it run.Suspension and brakes are all upgraded to modern technology to make sure it turns and stops as well as it looks and to make sure that added horsepower reaches the pavement!! I’m a BIG fan of this 1969 Pontiac GTO built by Miranda Built from the 2022 Goodguys Summit Racing National held in Columbus OH and I am sure You will be to.Check it out./ScottieDTV