In this video from the 2021 Auburn Americana Event part of the Auburn, Cord, Duesenberg Festival held in Auburn IN, I check out this very nice 1973 Pontiac Trans Am. This 1973 Trans Am in not a crazy custom or a high end show car.It was built to drive and finished to a very nice level. It’s covered in a Red paint that it wears well and has orange decals. 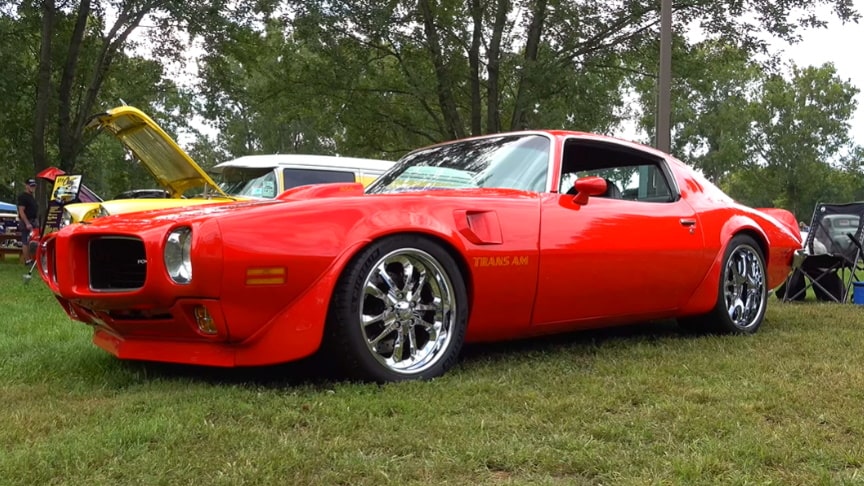 A color combination I have always liked.The interior has all been replaced and brought to nicer than new.Wheels and tires have been updated to something more modern.There is a 455 Pontiac Engine under the iconic shaker in the center of the hood.Not the one that the car came with.

But one that puts out a lot more horsepower and looks much nicer.The suspension and brakes have all been upgraded to modern technology to make sure it handles and stops as good as it looks.The 2021 Auburn Americana Event was a new addition to the Auburn, Cord, Duesenberg Festival that has been going on for many years.

It’s held every Labor Day Weekend in Auburn Indiana. If You have never been.Make sure You check it out. It’s a great time of year to be in Indiana and they are car crazy there!!.The 1973 Pontiac Trans Am is one of those cars that was cool in 1973.Add some modern day horsepower and handling and You just can’t beat it.This 73 Trans Am is one I am sure You will dig.//ScottieDTV