De Tomaso, famed for making the Pantera, is back with the P72, an homage to 60s prototypes with a modern twis! The car is built on the same platform as the V12-engined Apollo IE and it sounds amazing! In this video you’ll get to hear its unique sound, including start up, revs and some driving scenes on the Goodwood hillclimb during its world premiere at the Goodwood Festival of Speed 2019. 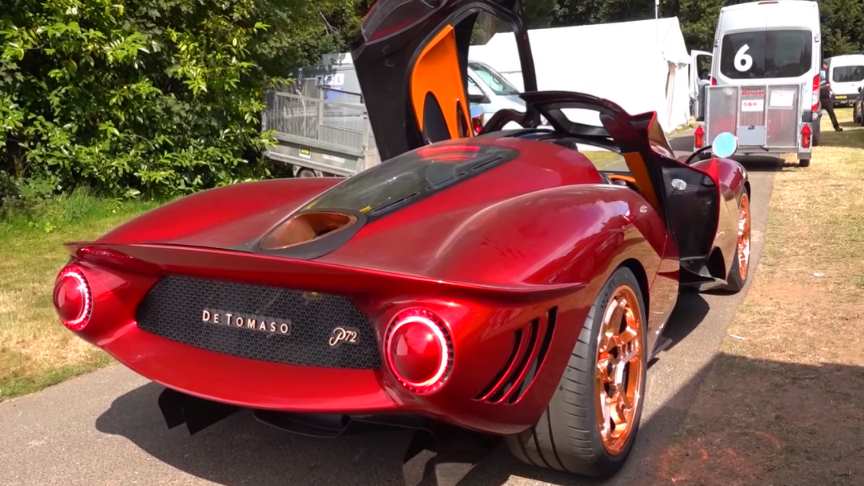 Designed by Jowyn Wong of Wyn Design, the exterior design is based on the P70 racing car and the LeMans race cars of the 1970s and combines modern elements with the classic shape. The exterior also features a top mounted exhaust system.

De Tomaso revealed that the P72 will be powered by a 5.0 litre supercharged Ford Coyote V8 engine featuring a roots type supercharger manufactured by American tuning company Roush. The engine is mated to a 6-speed manual transmission. Power output figures were not disclosed as the engine is still in development stage.The P72 will have a top speed of 221mph and will sprint from 0-60mph in about 2 seconds.

The interior is upholstered in diamond stitched leather, and has opulent instrumentation featuring polished copper elements, along with an open linkage gearshift lever finished in copper of the manual transmission installed in the car. The interior also has circular analogue and digital instrumentation design to recall the car interiors of the 1960s and 1970s.