Believing solar vehicles were feasible beyond the lightweight Aptera and Lightyear One cars, Joel Gregory Hayes wanted to create an all-electric, solar-powered motorhome that despite its weight could travel the Pan-American Highway from the arctic circle in Alaska to the tip of Argentina. 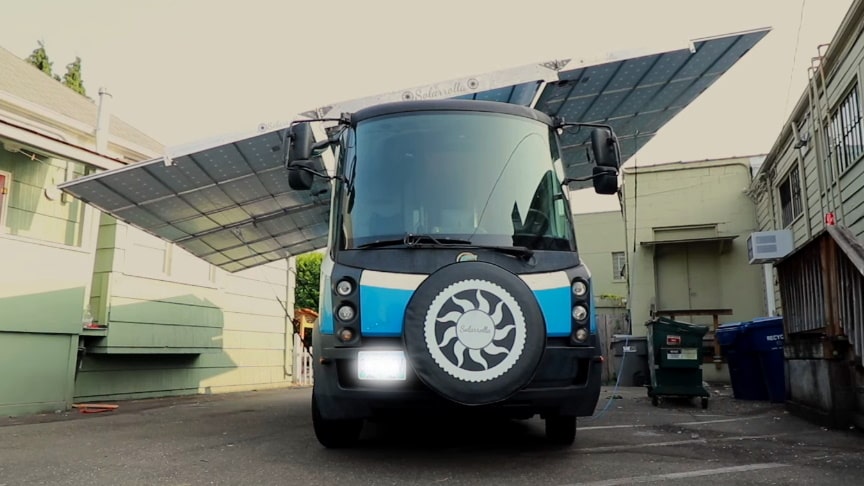 With the help of Solarolla Electric Vehicles he converted an electric delivery truck (a 2010 International EStar) into an EV with 120KWHs of battery power that is capable of being charged on solar-only for a maximum range of 200 miles.

The 24,330W rooftop solar array can be deployed to track the sun. First, 2/3rds of the array that are normally hidden under the van’s main roof for driving can be slid out using winches. Then winches work to track the sun by tilting the array up to a 45° angle. There are also two satellite panels attached to the rear of the van that can be detached and manually maneuvered to track the sun.

The Route Del Sol vehicle requires developing a love of Slow Travel: it takes 20 hours to charge the array of flexible solar panels, which in places like Alaska during most of the year requires a few days of patience in one location. Hayes explains that this waiting is a part of the journey so the van is equipped with a nice kitchen – of course, fully electric and powered by the sun, including the 90-liter refrigerator and induction cooktop – and equipment like surfboards to turn waiting time into an adventure./Kirsten Dirksen